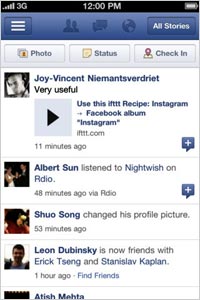 In the wake of Facebook introducing mobile-only buys on the site this month, the company’s ad partners cite strong early demand for the new ad option, based partly on promising results. Facebook initially launched mobile ad placements at its fMC conference in February, but only as part of a bundled ad buy on the site.

Now marketers can choose to run sponsored story ads that appear only in a Facebook user’s mobile news feed as a separate buy. While it’s still early, third-party ad sellers on Facebook say the mobile ads so far have outperformed their desktop counterparts.

They point to click-through rates of 1% or better in mobile compared to an average rate of 0.05% for ads generally on Facebook, according to a Webtrends 2010 estimate.

The novelty factor could play a part in that higher response rate, as well as the ad format simply occupying a larger share of the screen on a mobile device.

“If you’re on an iPhone, the unit takes up almost the entire screen, or a significant chunk of that real estate,” said Rishi Dean, SVP, product at Nanigans, which specializes in Facebook advertising. “Compare that to a desktop version of Facebook, where you’ve got seven ads or whatever on the right rail, competing for attention.”

Nanigans recently added the mobile-only ad feature to its Ad Engine platform for running Facebook campaigns, allowing clients to target sponsored stories in mobile according to demographic factors like gender and age, as well as geographically. Dean said demand for mobile-only buys has been highest among mobile app and game developers, for whom his firm has already run multiple campaigns.

“It didn’t really make sense for them to advertise on the desktop-only or on the desktop and mobile when they really wanted to drive people into the App Store,” said Dean, whose clients in the social game space include Kabam, Kixeye, Atari. But he expects a wider range of advertisers, especially in the local and long-tail categories, to embrace mobile advertising on Facebook over time.

Lucy Jacobs, COO of Facebook ad firm Spruce Media, said the company has been encouraged by the high click-rates in testing of mobile ads so far, with rates typically ranging from .8% to 1.7%. Sponsored story ads featuring brand page “likes” have performed especially well.

However, Facebook ad partners have noted that while click rates are higher in mobile, conversion rates are lower. Nanigan’s Dean, for instance, pointed out that people who click on app ads in mobile don’t end up installing the app as often as they do on the desktop.

That’s partly because mobile users are sent off Facebook to the App Store or Google Play to get an app rather than the more seamless process of downloading a native Facebook app on the desktop. (Sponsored stories don’t yet allow people to link directly to the company’s new App Center.)

Even so, ad executives say the higher click rates in mobile compensate for lower conversion rates. “It does net out to be a bit better overall,” said Dean.

The heightened interest hasn’t just come from app developers. Simon Mansell, CEO of Facebook ad specialist TBG Digital said about 20 clients clients, including Heineken and Hugo Boss, have made mobile part of broader ad buys on Facebook. One unnamed client spent about $112,000 in a week just on the mobile portion of a campaign, he noted.

“There’s been demand to move more spend over to mobile,” he said. “It’s based more on performance of ads on mobile, than clients phoning up and saying ‘I want to be on mobile’”

Other social ad firms are gearing up to launch mobile ads in the next quarter. “For a lot of our clients, it’s definitely part of their planning cycle,’ said Josh Backer, co-founder and EVP, ad delivery at Unified, which just raised a $14 million round of funding. That includes clients from app developers to banks to business-to-business companies.