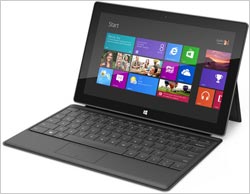 Other than the occasional mouse and keyboard (and the Xbox, of course) Microsoft stays away from building and selling its own hardware for Windows computing. But last night at a Hollywood event, it appeared that the lure of Apple’s successful model was too much to resist. Or at least the Windows manufacturer felt that it learned a lesson from Google’s attempt to marshal a range of OEMs to take on the formidable iPad. And so the Microsoft Surface surfaced last night.

The 10.6-inch display is powered by either Windows 8 or Windows RT (Windows for an ARM processor). The high-end unit has a built-in kickstand and an optional case includes an embedded keypad. Two models will be available, a lower-powered RT version and the high-end one running on an Intel processor and Windows 8. The low-end model will have only 32GB and 64GB options, but the high-end unit will go up to 128GB of storage.

When it comes to apps, clearly Windows 8 already was being built with tablet interfaces in mind. The beta build of the OS already has a library of apps. Generally, apps written for Win 8 should run on the tablets. Microsoft has announced support from Netflix. And according to the presentation last night, Windows 7 software will also run on the Surface.

Microsoft is taking more than a few pages from the Apple playbook. The Surface is being promoted for its advanced “industrial design” that tries to distinguish itself from the iPad in a few key respects. Its USB port addresses an ongoing complaint among iPad owners over the difficulty of moving content on and off the device. The 16:9 aspect ratio of the screen accommodates true widescreen/HD formats without letterboxing. The optional “Touch Cover” with key input claims to “sense keystrokes as gestures” to make touch-typing faster. Like Apple’s iPad 2 cover, this one also uses a magnetic fastener. The casing of the Surface is made of VaporMg (pronounced ‘Vapor Mag’) that is supposed to create a luxe finish.

Clearly, Microsoft is positioning Surface and Windows 8 on tablets as the productivity-oriented alternative to the iPad that does not sacrifice design or the ease of consuming content as well.

No pricing was announced. With powerful hardware and features, the Surface will have a tough time beating the iPad and its famously well-controlled supply chain. But by launching its own hardware, Microsoft has the option to take a loss on the hardware to try to buy its way into yet another market owned by a pioneering competitor. For Xbox the strategy was a winner. For search and Windows Phone, not so much.

It raises the question of whether Microsoft will really get behind selling its own hardware. Could the Surface really serve as a reference design for other OEMs? The software company is in a tough position, in that Surface will be competing with the very hardware makers on whom Microsoft depends for licensing Windows.

If Microsoft decides to eat some of the manufacturing costs in order to make the unit price competitive, it puts unfair pricing pressure on its hardware partners. And unlike Google’s open-source Android OS, Windows 8 is not free. Microsoft’s hardware partners will have to include in their tablet pricing the licensing cost of the OS, which obviously Microsoft itself does not.