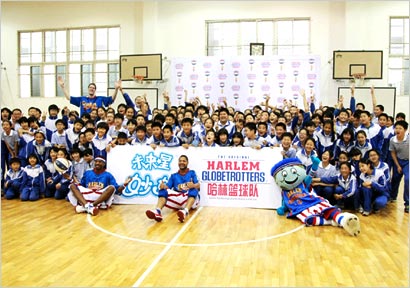 The Harlem Globetrotters show team is expanding both its geographic and branding footprint. While focusing on having a year-round presence in hoops-hungry China, the organization in the U.S. has signed a marketing deal with 24 Hour Fitness, brought in a new marketing agency to grow sponsorship activity, and is doing more in-marketing programs including playing for the first time ever in Brooklyn, at the new Barclays Center this fall. The Globetrotters' CEO Kurt Schneider talks to Marketing Daily about the team's roadmap to success both in the U.S. and China.

Q: To be clear, you guys are no longer aligned officially with the NBA, right?

A: That was a 2008 and 2009 partnership. We went into it for the right reasons: They had infrastructure; we had the IP; we are non-competitive. We still work with them, but we both realized we no longer needed an in-depth partnership. They were focused on building the NBA brand and we were focused on the Globetrotters brand. They represent us in Canada for sponsorship sales. But we don't have an official sponsorship with them.

Q: What's the big picture for the team in China?

A: We want to replicate there what we are doing here in the U.S. It is the one market overseas where we have a permanent presence, which we'd like to do everywhere -- but it's the one we are focused on first. We have an office there, an agency there [Sports & Entertainment Asia], and we are committed to being in market there six times a year. In other markets [outside the U.S.] we are there once per year. In France we are there twice.

Q: What does each of the six visits involve?

Q: Why are you doing clinics in schools there?

A: In China there's a big push by the government: we have an obesity problem -- but they have kids who are under so much pressure, studying all the time, that they really don't get outside. The government wants to change that. What we are doing fits both the U.S. and China: we make fitness fun.

Q: Just how big is basketball in China?

A: Huge. It started with the missionaries who went over and tried to convert the Chinese in the 1920s, and with the rise of Yao Ming it has just gotten bigger. The CBA [Chinese Basketball Association] is enormous. The NBA is building courts there; so are Nike and adidas. The government is as well. And the largest migration in history from rural to urban is happening there right now. We are also at a nexus in China because, while basketball is popular, for the first time you are also seeing the rise of family entertainment as a leisure activity. We sit right there because we are sports entertainment. And we always win.

Q: Who are your U.S. sponsors?

A: Currently in U.S., we have Greyhound, Howard Johnson Hotels, Spalding, and Russell Athletic. Those are our four main U.S. sponsors right now. And we are making a huge push right now in the U.S. to expand. I came on five years ago and the goal for long-term build was to make the brand current and relevant, which we have done. And we needed to create long-term platforms so sponsors could activate year-round behind us, and we have that in place now, too. And we have just signed [sports and entertainment firm] Leverage here in New York as our agency to help us get new partners.

Q: What does a sponsor get?

A: We are a marketing platform. Sponsors get in-game activation in 220 markets. Then there's our experiential tour mid-December to mid-April. Then in the summer we have around 120 clinics for moms, families and kids 6 to 14, which we are doing as part of our partnership with 24 Hour Fitness in 12 markets. And then we have summer festivals, with the first one ever in Northern Michigan.