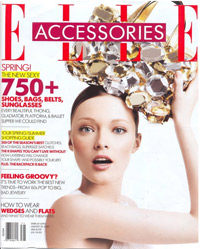 The experience of rummaging through the closet for fabulous outfits from the past applies to magazines too. Hearst Magazines is bringing back Elle Accessories, a spinoff of the iconic fashion title that focused on accessories during its brief publication life.

Launched by previous owner Hachette Filipacchi in 2005, Elle Accessories gloried in the endless array of complements and finishing details available to the fashionable woman, while providing fashion and retail advertisers with a special space to highlight their handbags, jewelry, watches, shoes, and scarves. Hachette shuttered the title in 2008 as recession set in.

Having acquired Hachette Filipacchi in 2011, Hearst plans to relaunch Elle Accessories with spring and fall issues, beginning with a fall issue for 2012. In print, Elle Accessories will have an oversized format and be delivered to some subscribers with the October issue of Elle, according to The New York Times. It will launch with a circulation of 500,000. Digital editions for tablet computers and e-readers are also being planned.

The NYT also reports that Elle Accessories is relaunching with support from various advertisers, including Neiman Marcus, with a 12-page insert. As such, 100,000 copies will also be mailed to Neiman Marcus customers.

The paid digital circulation of The Economist surged by over 50% in the last year, according to the magazine publisher, jumping from 78,000 to over 120,000 in the 12-month period ending March 31. That represents about 14% of its total paid and verified circulation of 844,766, per the Audit Bureau of Circulations report for the six-month period ending December 2011. The news comes a few months after The Financial Times, a sister pub of The Economist, reported that digital subscriptions have surpassed print subscriptions in the U.S., reaching 285,000 in April of this year. Publisher Pearson also reported that digital revenues made up 47% of total FT revenues.

Gautam Ranji has been named senior vice president of licensing and development at Hearst Magazines International. In this role, Ranji will be responsible for the overall performance of the division’s various international licenses and joint ventures around the world, as well as oversight of the HMI team in the New York office. Ranji previously served as senior vice president for corporate development at Dun & Bradstreet, which he joined in 2010. Before that he spent four years working for MTV, where he rose to the position of executive vice president for international strategy and operations.

Georgine Anton has been named senior vice president and chief client officer for Meredith Xcelerated Marketing, where she will encourage big clients to make full use of MXM’s resources for global, digital and customer relationship marketing. Anton is returning to Meredith from Atlantic Media Co., where she headed the marketing-services division. Before joining Atlantic, she spent 12 years at Meredith, most recently as SVP. Before that she was managing director at Time Inc.’s custom publishing division.