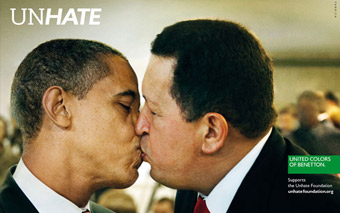 The ad campaign, which ran in newspapers and magazines, was credited to two agencies: Italy’s Fabrica Treviso and the Amsterdam office of 72andSunny, the MDC Partners ad shop.

The campaign shows world leaders, who are famous for not liking each other, embracing and kissing. It includes President Obama giving a big smooch to Venezuelan president Hugo Chavez. The leaders of Palestine and Israel are featured lip-locking in separate ads, as are the leaders of Germany and France in others.

Campaigns for McDonald’s, Volkswagen, Ray-Ban and Unilever’s Axe were among the brands recognized with Gold Lions. All winners, announced through the week, are highlighted at www.cannes.com.