Tylted's HTML5 Game Hit Suggests A Future Outside Of Apps 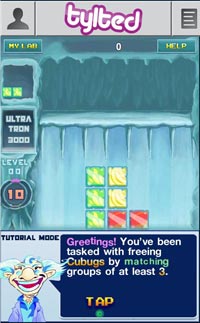 In a proof of concept that HTML5-based mobile Web design can compete with smartphone apps, social gaming company Tylted launched the falling cube game Cubugs on May 15. In a month’s time the game has attracted more than 1 million unique players. The company says that about 33,000 unique visitors are playing the game daily. Tylted CEO Lon Otremba argues that if this site were an app, it would be among the top downloads in the iTunes Store.

As part of the experiment in pushing the boundaries of mobile Web models, Cubugs was also structured to optimize audience, since it was the first game at Tylted that did not require user registration. Nevertheless, the game is cloud-based and capable of logging in a user so games and previous scores can follow them across devices, including the Desktop. In our test of the game we were able to restore on the Chrome Web browser precisely the point we were playing on the iPhone.

Tylted created the game itself to demonstrate both HTML5 generally and the Tylted platform as a resource for developers outside of the iOS and Android app markets. It envisions the platform offering APIs for third-party developers to create apps within the Tylted ecosystem. Otremba says, “We want the games development community to realize they are not beholden to the app store to bring their games to market.” He contends that Cubugs’ rapid success demonstrates that a viable app-like ecosystem can exist apart from Apple.

Otremba tells Mobile Marketing Daily that developer swill not be selling apps directly to consumers. “Tylted plans to monetize the new games from outside developers in the same ways we monetize all of our traffic and users, through involvement in our virtual economy, and through advertising. We will soon be announcing several innovations on both fronts." He says that the company offers developers scale on the mobile Web and various partnership models.

Tylted has a full suite of mobile Web social games, including Pocket Beanie Babies and Vampire Rising. The company changed its name earlier this year from the long-lived Cellufun. When we spoke with Otremba in April, he said that Tylted had over 9 million registered users and sees between 10 million and 15 million monthly uniques to generate about half a billion monthly page views.

gaming, mobile
1 comment about "Tylted's HTML5 Game Hit Suggests A Future Outside Of Apps ".
Check to receive email when comments are posted.
Next story loading