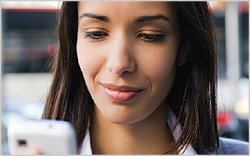 It should come as no surprise to students of Internet and mobile media history that African-American and Hispanic mobile users are adopting mobile shopping technologies at a much faster rate than Caucasian users. In fact, marketers in pursuit of the most dedicated m-shoppers should stop chasing the usual suspects for early adoption of the new shiny tech objects -- that mythical single, young techophile. The people seeing the greatest benefits from mobile devices as shopping tools represent a much wider range of users.

According to a new study by the Integer Group and M/A/R/C Research published in The Checkout, 18% of African-American shoppers use their mobile device to make purchases, as do 16% of Hispanics. But only 10% of Caucasians are already leveraging mobile as buying tools.

The early adoption of m-shopping features by these demos occurs across the board in all shopping-related mobile activities. For instance, while the study showed that only 13% of Caucasians use their phones to read product reviews and maintain shopping lists, 21% of African-Americans do. And while 13% of Caucasians use devices to do price comparisons on their phones, 20% of Hispanic users already do so.

The research also found that families with children had faster adoption curves for m-shopping functionality, and these families preferred that brands and retailers interact with them via SMS or mobile app. And despite the conventional wisdom that men like their tech toys, when it comes to m-shopping, women are the most dedicated users.

Overall, both minority demos were more receptive to mobile communications with brands, with about 42% of African-Americans willing to get SMS updates from brands, 30% of Hispanics and only 21% of Caucasians. Across other mobile marketing types of interactions with brands (mobile Web site, apps, and scan codes), both early adopting groups had between 27% and 30% acceptance rates compared to 20% or so for Caucasians.  Across all of the same mobile marketing categories, users with children were more receptive to advertisers and promotions than were people without children.

These results run parallel to longstanding patterns in mobile uptake. Both minority demo studies here were among the strongest and by far the most active early adopters of mobile data services. Even as smartphone penetration remains higher in Caucasian demos, African-Americans and Hispanics find more ways to use their mobile devices more often as media and research tools.

Integer Group and M/A/R/C say that some of the m-shopping findings may seem counterintuitive to marketers' preconceived notions of tech early adoption. Generally in m-shopping the typical white, male, single, smartphone-wielding early adopter is presumed to be in the lead. But in fact, parents with children are often more m-shopping-savvy than their single and younger counterparts. Women are in the lead of this tech trend. And both African-American and Hispanic audiences are honing in first and most aggressively on the benefits of m-shopping -- regardless of the mobile technology they use.