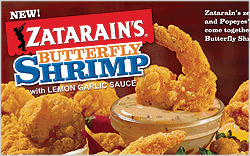 From June 25 to July 29, the more than 1,600 Popeyes locations in the U.S. are offering a Popeyes Zatarain’s Butterfly Shrimp meal featuring eight shrimp, Cajun fries, a biscuit and the chain’s Lemon Garlic Dipping sauce ($4.99).

Zatarain’s, the nearly 125-year-old brand best known for its New Orleans-style rice mixes, has a foodservice business supplying ingredients and spices to restaurants, but this is the first time that it has done a co-branded product with a national restaurant chain, according to Zatarain’s General Manager Michael Morse. (Zatarain’s is supplying Popeyes with the breading and seasonings for the butterfly shrimp.)

Popeyes, founded in New Orleans in 1972, is a leader in the New Orleans foodservice industry segment and the world’s second-largest QSR chicken concept by number of units (2,044 total restaurants as of mid-April, including units in the U.S., Puerto Rico, Guam, the Cayman Islands and 26 other countries). Popeyes is a division of AFC Enterprises, Inc.

For Zatarain’s, which has been pushing to evolve and expand its products, as well as the way it connects with consumers, the co-branded promotion – which will generate some 550 million impressions nationally through Popeyes’ TV ads, in-store promotions, billboards and other efforts – is a major opportunity, says Morse. The co-branded offering is also being promoted on both brands’ sites and Facebook pages.

The most recent major new lines from Zatarain’s -- which now offers 200-plus products, including pasta dinner mixes, fry mixes, seafood boils, stuffing mixes, seafood cakes, condiments, sauces, spices and extracts -– are frozen entrées. Those now include 10 microwaveable single-serve dishes, and four dishes-for-two that can be prepared in a skillet in about 10 minutes.

As Zatarain’s seeks to expand its national share and profile – capitalizing on Americans’ increased interest in Cajun and Creole foods -- its marketing has also expanded and taken new directions in recent times. TV ads featuring its “Jazz It Up With Zatarain’s” tagline, both for its new products and its rice mixes, have been running in key markets around the country. (TV ads ran through April and will start up again in September, according to Morse.)

Given its deep New Orleans roots, the brand has always made the most of the Mardi Gras holiday, and this year, it used a variety of new channels to engage consumers around the country in the fun.

In addition to featuring favorite Mardi Gras dishes on its site and Facebook page and tweeting up excitement, Zatarain’s offered (through a tab on its Facebook page) a free branded online Pandora radio station featuring classic Carnival favorites, jazz and swing music.

It also brought fans into the Mardi Gras experience via “Zat’s Cams” showing live video footage straight from the streets of New Orleans, and offered an interactive “Create Your Krewe” app allowing fans to select four friends to be in their personal Mardi Gras krewes, celebrate together and receive coupons.

In addition, Zatarain’s created its own “Krewe of Influencers”:  Five bloggers with a variety of backgrounds (from a foodie to a stay-at-home dad) who took part in the Mardi Gras festivities and shared their experiences with people around the country. Those bloggers are continuing their brand-advocate roles, showcasing the “ease, convenience and flavor” of Zatarain’s products and recipes -- and now the co-branded shrimp promotion with Popeyes—according to Morse.

Zatarain’s worked the events angle by hosting 2,000 house parties around the country (through HouseParty.com) in the days leading up to Fat Tuesday.

Furthermore, in a new twist on its ongoing partnership with New Orleans chef John Besh (Besh Restaurant Group), this year, in addition to Besh’s developing recipes, attending blogger conferences, socializing content and conducting PR interviews, his voice was heard on the audio systems in 1,000 retail stores around the U.S., offering tips on celebrating Mardi Gras with “bold flavors.”