Brands Line Up To Activate Against NBA Draft 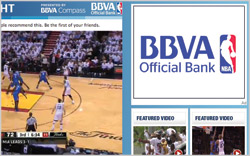 The National Basketball Association says eight brands have signed up to activate as sponsors of this year's NBA Draft. At the top of the heap is State Farm, which has title sponsorship as well. Also on board are Sprint, HP, Taco Bell, BBVA, Gatorade, American Express, and Adidas, per the association. BBVA, Gatorade, HP, Sprint and Taco Bell are associate partners.

The NBA says State Farm gets its name on the event logo, and throughout the arena and stage set up, during the live telecast on ESPN. State Farm will also be on Draft coverage on NBA TV, on NBA.com, and on the NBA’s Facebook and Twitter social media channels. The company will run four 30-second ads during the draft on NBA TV.

At NBA.com, State Farm will have an online roadblock on draft day. Also, the NBA says State Farm will be setting up basketball shooting stations for fans on the concourses of the Prudential Center and distributing branded Thundersticks to fans.

Adidas will have co-branded NBA draft hats worn by top picks, who will pose in the hats beside the NBA commish. The 2012 NBA Draft Hat features the team name on the front with the official NBA Logo, and team logos are on the back. They are being sold at the NBA store in Manhattan and online, per the the NBA.

American Express will use its sponsorship to host a pair of cardmember experiences. The first is the 2012 NBA Draft Experience -- where in addition to access to the draft, cardmembers get a behind-the-scenes tour, a pre-Draft reception and a meet and greet with 2012 Kia NBA Rookie of the Year, Kyrie Irving. Cardmembers will also have reserved seats to watch the event.

BBVA will have on-site branding, digital and social media and broadcast units, and will give financial advice to the families of drafted players during the NBA Draft Family Seminar on Wednesday. Gatorade bottles and Gatorade branded cups will be everywhere at the event and back of house areas, and the brand gets on-site signage, broadcast and digital media assets.

HP Touchsmarts will be used during the draft at the reception space and back of house and the Commissioner will use HP-branded index cars to read each draft pick.

Sprint will host a live broadcast of the draft through its Sprint NBA Mobile app on Android 2.2 and 2.3 phones, and through the NBA Game Time app on iPhones. The NBA says that companies that have committed to advertising during the draft are State Farm, Taco Bell, Sanofi-Aventis, Spalding, Right Guard, HP, Anheuser-Busch and Sprint.