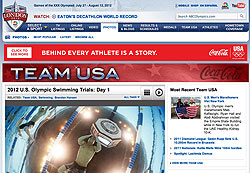 Looking to entice sports viewers for its big August London Olympics push, NBC rolled out coverage of the U.S. Olympics Trials on Sunday. But it seems viewers need more enticement.

Bad as the numbers were for the "Trials," the numbers were in the range of what this kind of programming has done in the past. Back in 2008 -- before the Beijing Olympics -- the "Olympic Trials" took in a 1.5 rating.

NBC was one of three networks to score over the 1 rating mark on the night. Univision was next with a 1.1/3 and ABC hit a 1.0/3. Fox and CBS tied with a 0.8/3. Except for NBC's "Trials" and "Dateline," all other networks were in repeats.