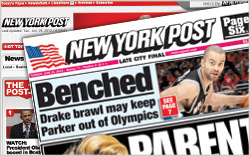 News Corp. investors like the idea of the company's plans to split its businesses in two. Its early Tuesday morning stock price rocketed up more than 8%.

Earlier, News Corp. said it wanted to split its company into two publicly traded selling units -- one for its slower-growing publishing and newspaper business, and another for its faster-growing television and film businesses.

In mid-day trading, News Corp. said the stock price was at $21.75 on Tuesday.

Industry-wide traditional publishing business have seen revenue declines in advertising revenues. That has also been true for News Corp's U.K. and Australian newspaper business. Overall, business profitability has been gained by its Dow Jones and HarperCollins units.

Like most big media companies, cable television has seen big growth. News Corp's cable business operating income was up 15% $846 million, with revenue growth of 16% to $2.38 billion for its most recent third-quarter fiscal reporting period, which includes Fox News and FX channels. Its film unit witnessed an 11% rise in revenue to $1.7 billion, with operating income 10% higher at $272 million.

Mid-size and small TV stations and newspaper companies have also seen better financial and stock growth as a result of splitting up their business units into separate companies.

News Corp. has witnessed almost a 20% rise in its stock price over the last year. All this in the face of increased scrutiny by U.K. regulators over numerous allegations and admissions related to the phone-hacking scandal.