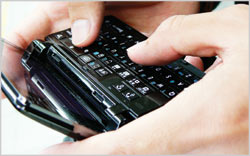 When it comes to using mobile phones as the primary means of Web access, emerging countries like India or China might come to mind. But nearly a third (31%) of adult U.S. mobile Web users say they now go online mostly through their cell phones, according to the latest study by the Pew Research Center’s Internet & American Life Project.

That works out to 17% of all American adults who own a mobile handset.

Those proportions are slightly above the corresponding figures last year of 27% and 13%, respectively, but the percentage increases are within the margin of error.

Overall, more than half (55%) of mobile owners go online through their phones, up from 47% last year.

Leading the mobile-only Web trend are young people and minorities. Nearly half of all 18- to-29-year-olds (45%) who access the Internet on phones do most of their online browsing on their mobile device. Half (51%) of African-Americans and 42% of Hispanics in the same category also mostly go online through their phones. By contrast, only 24% of white mobile Web users turn mainly to their devices for Web access.

Less affluent (income of under $50,000 annually) and less well-educated people were also more likely to rely mostly on their phones for Web browsing than those with higher incomes and college or higher levels of education. Why are some people mostly using their phones to go online?

The majority (64%) of “cell-mostly” users cited convenience and the ubiquitous nature of mobile phones as the main reason. They also said mobile devices better fit their online habits (18%), and 10% pointed to a lack of other options for going online.

Looking at the broader population, Pew found 88% have a mobile device, and almost half (49%) use their devices to access the Web or use email. Three-quarters of mobile Web users (74%) go online on their phones at least once a day, or 41% of all cell owners.

The report highlighted that mobile Web browsing and email use has risen steadily in recent years, to 55% of mobile owners as of April 2012, from 31% three years ago. The Pew figures roughly correspond with the latest data from comScore showing that 49% of mobile subscribers (13 and over) used a browser in April.

The Pew findings were based on telephone (and cell phone) interviews conducted by Princeton Survey Research Associates International from March 15 to April 3, 2012 among a sample of 2,254 adults 18 and over.