In Fashion, Brands Intensify Their Comeback 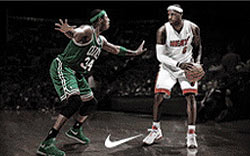 Goodbye, store brands. Hello, Nike and Armani. The latest results from Brand Keys Fashion Index show that 29% of clothing shoppers say brand is an important factor in their purchase decision, more than tripling in importance in the last four years.

In 2008, when retailers were desperate to sell clothes, only 8% of consumers said they cared about brands. Big gainers in this year’s ranking include luxury brands such as Armani, Versace and Chanel, as well as leisure brands like Nike. Overall, Ralph Lauren/Polo came in at first place.

“No matter the category, we see one trend growing,” writes Amy Shea, EVP for Brand Keys, Inc., the New York-based brand and customer loyalty research consultancy -- “the increasing importance of fashion brands. While it’s true that consumers are not spending recklessly, that very reality is what drives them into the arms of true brands.”

Lauren was the most-mentioned brand overall, with 39%; a favorite sports team (like those Yankees hats or Red Sox t-shirts) came in second, declining to 36%; followed by Armani with 34% (compared with 32% in last year’s rankings); Nike, with 30%; and Versace and Chanel, tied at 27%.

Brand Keys bases its ranking on 7,500 respondents, first asking them to indicate the importance of fashion brands, compared to how important they were in the past, and then to name (unaided) the brands that matter most.

apparel, fashion, research, retail
1 comment about "In Fashion, Brands Intensify Their Comeback ".
Check to receive email when comments are posted.
Next story loading