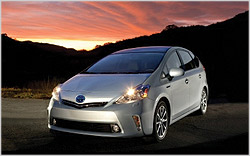 Summer is here -- and that means automakers are loading their cars, trucks and big tops into 18-wheelers and hitting the road with experiential tours intended to get vehicles in front of people. Kia is hooking up with Vans Warped Tour and Chrysler is taking vehicles to employees; Nissan is on the road; and Toyota is going on the road with this year's version of the "Creation Station."

The program launched last year to support the Prius v, but it's bigger this year as it visits more markets and comprises a bigger selection of the automaker's family-oriented vehicles. The Prius v extended the hybrid brand into the crossover segment, so it too was Toyota's first family vehicle under the Prius moniker. This year's tour will also include the Highlander and Highlander Hybrid, RAV4 EV, 2013 Avalon sedan, Landcruiser, Prius Plug-in, Prius c, Sienna and Yaris.

The tour starts over the July 4th holiday, and rolls through the fourth quarter visiting fairs, culinary events, and arts festivals nationwide. Beginning at "Fair Saint Louis," it also goes to events like Taste of Dallas, the Eat Real Festival in Oakland, Calif., the Dumbo Arts Festival in Brooklyn, N.Y., and the Jazz Aspen festival at Snowmass.

The exhibition, via Los Angeles-based Filter Creative Group, has such elements as the Toyota Cargo Challenge, which demonstrates the load capacity of the Prius v. The challenge gets teams of up to four people to compete to see who can load the Prius v cargo space fastest for a chance at prizes. The program also has arts and crafts, 3D photo opportunities for families, and a giant dice game that emulates the Prius advertising.

A Toyota spokesperson says the Creation Station program visited nine events in 2011 and will visit nine events this year as well. "The common theme is reaching families and providing them with opportunities to explore the Toyota vehicle line-up outside of showrooms in a fun and casual atmosphere. Toyota supports a number of programs throughout the year that visit events from music festivals to bass tournaments.  Each program is used to market a distinct vehicle lineup and reach a unique demographic. With nearly all of its sponsorships, Toyota seeks to secure category exclusivity, although it isn’t always possible."