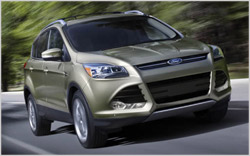 Ford generates the most media bang for the buck, according to General Sentiment's Impact Media Value, which measures a brand's reach, and places a value on the overall level of discussion and exposure for the brand.

The social analytics company says the Impact Media Value of Ford is $90.2 million, putting it in the top spot of its new Auto MediaMatch report. Chrysler follows at $89.6 million, Honda is third with $89.6 million. Then comes Toyota at $72.1, and Mercedes-Benz at $71.4 million in the top five of the 29 automotive brands General Sentiment analyzed between March 1 and May 31.

Online discussion about Ford has been about how it had to commit its U.S. assets, including its blue oval logo, to access $23.5 billion in loans in 2006. In late May, the company took sole ownership of the logo after Moody’s raised Ford’s credit rating from junk status. Buzz has also been about Ford‘s North American operations recording a pre-tax profit of $2.1 billion in the first quarter, its highest quarterly profit since 2000.

Chrysler buzz is has been driven by the company's turnaround, per General Sentiment. and net profit of $473 million in the first quarter this year, its best quarter in 13 years. Chrysler continued to improve in April, posting a 20% monthly sales increase. The company’s financial comeback generated positive exposure on Twitter.

Mercedes-Benz dropped to third last year in luxury car sales, but the German automaker is plotting a comeback with the overhauled A-Class. The sporty hatchback will target users of Apple’s iPhone; Mercedes-Benz outfitted the A-Class with technology that transmits iPhone content onto the car’s display. BMW, Chevrolet, Dodge, Nissan and Hyundai complete the top ten.

The report also highlights TV show matches for Ford, GM and BMW. “SportsCenter,” “MythBusters,” “The Daily Show,” the Grammy Awards and “Glee” are top matches for all three automakers. The top 10 TV show matches based on overlap with the Ford audience, which contains 152,647 Twitter users also include "The Simpsons," "Nightline," "The Grammy Awards," "American Idol," "Dog Whisperer," and "The Big Bang Theory."