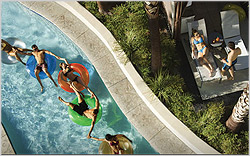 Mandalay Bay Resort and Casino has, for the first time in six years, done a major redesign of its gateway web site, www.mandalaybay.com. The new site, which is also now in HTML5 and can therefore be used on tablets, continues the campaign theme that says travelers who stay at the Bay aren't tourists but "Resortists."

The effort, and the new site, is by Mandalay Bay's AOR Santa Monica, Calif.-based RPA. The campaign positions the resort as a destination with its own 24/7 experiences and entertainment.

Also new is an expanded social media integration where visitors can grab events from the event-calendar page and view tweets from the live Twitter stream on the home page. In addition, users can opt in for regular text-message updates from Mandalay Bay about deals and specials and connect with the property on sites like Foursquare and Facebook.

The site also touts the resort's 11 acres of outdoor space, and a "beach" area of the site talks about pools at the resort and accepts reservations for cabanas. The resort's water-sports area has three pools, a wave pool, a "river," and a top-optional pool with an immersed bar (that pool is separated from the other areas.) The resort's pool area the Las Vegas Review Journal's Readers "Best Pool of Las Vegas" for seven years in a row. The Hard Rock gets second place.

Mandalay Bay, a property of MGM Resorts International, has 3,309 hotel rooms, 24 elevators and a 135,000-square-foot casino. It also has a convention center and a 12,000-seat Mandalay Bay Events Center. The Mandalay Bay Tram connects the resort to its sister properties, Excalibur and Luxor.

The only problem is it can't be airlifted to Asia. MarketWatch says the big growth market for gambling is China, which has seen the sector grow over 32% per year over the last five years. The April report says that by 2013 Macau will be the big dog in gambling, and will double its revenues over the next five years,

High-end property Wynn Resorts reportedly has a head start in China, with the highest-rolling gamblers, guests spending the most in room rates, and betting the most per hand anywhere.