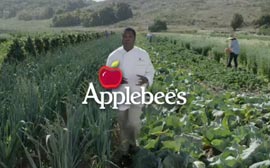 “See You Tomorrow,” the chain’s first ad campaign from new agency-of-record Crispin Porter + Bogusky, was launched July 2 with a series of TV, online, radio and outdoor ads, plus in-restaurant promotions.

The theme/campaign is also being promoted on the brand’s Facebook page (which currently has nearly 2.79 million “likes”) and Twitter presence (more than 22,500 current followers).

The new ads feature Applebee’s’ chefs standing in fields of vegetables and fruits -- the sources of the chain’s summer-menu ingredients. As they wax on about the freshness and nutritional/taste benefits of the ingredients, a voiceover cuts them off, to offer brief flashes of the summer menu offerings, and their value pricing. (The summer entrées start at $9.99.)

“‘See You Tomorrow’ represents the next step of our revitalization and a departure for the Applebee’s brand,” noted Becky Johnson, Applebee’s VP of culinary and marketing. “We’re focusing on our culinary credibility [by] sharing where our fresh ingredients come from -- and having some fun along the way.”

DineEquity, Inc., which bought Applebee’s in a $2 billion leveraged buyout in 2007, has been working on improving the chain’s performance by investing in remodels, as well as by marketing its “Sizzling Skillet” entrées and now, its “fresh” menu approach.

By the end of this year, through a $200 million-plus investment, more than half of Applebee’s nearly 1,900 U.S. locations (it also has about 100 non-domestic locations) will have been revamped with new signage and awnings featuring the brand’s updated logo, stone-faced entryways, bar upgrades, flat-screen TV’s, and sleek lighting fixtures replacing stained-glass-like fixtures. In addition, in line with its “neighborhood” positioning, locations now feature murals reflecting each restaurant’s neighborhood (replacing chainwide 3D pop-art in place since Applebee’s’ founding in 1980).

The efforts have been paying off, at least in higher customer check sizes. Applebee’s’ same-store sales grew 2% in its fiscal 2011 and 1.2% in Q1 fiscal 2012, despite flat traffic in 2011 and a traffic decline in Q1 2012. Increases in alcoholic beverage orders, as well as gift cards, have helped boost the chain’s performance.

Its profitability has also been improved by DineEquity’s aggressive moves to restructure the company by selling/refranchising underperforming corporate-owned stores:  95% of Applebee’s locations are now franchised.