NASCAR, Partners, Back Troops Online And Off 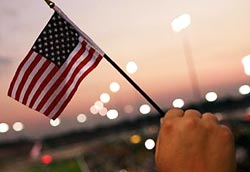 Stock-car racing organization NASCAR is rolling toward Independence Day and the two big races during the holiday weekend with a cause-marketing program it launched on Memorial Day.

The "NASCAR Unites - An American Salute" program also involves individual teams, NASCAR sponsors, who are getting behind a new digital platform, charity and activation at  the Independence Day Weekend races at Charlotte Motor Speedway and Daytona International Speedway. At the Coca-Cola 600 in Charlotte, N.C., and Coke Zero 400 at Daytona, Fla., this weekend, cars will wear themed art, drivers will wear patriotic firesuits, and they will roll on Goodyear tires whose side walls sport a "Support Our Troops" message.

A  new Facebook page is designed to connect fans to the "American Salute" program by spotlighting military families and letting fans leave messages of thanks, “like” and share. The site, Facebook.com/NASCAR, focuses on a different battalion, or military family every day this week, and also showcases military charities like the Armed Forces Foundation, Support Our Troops, and Goodyear Gives Back.

Matt Shulman, senior director of business solutions for NASCAR, tells Marketing Daily that the Facebook program extends -- and is justified by -- a Memorial Day test featuring two troops at Fort Bragg, N.C.. "We have never done anything like this before," he says, adding that the Memorial Day test of the Facebook platform "was one of the most successful things we have done. We are getting about 15 likes per minute now. We have the most brand-loyal fans -- over three million on Facebook -- so we have a good place to start the conversation and also get drivers, teams and partners involved."

Shulman says Goodyear and other sponsors will be sending about 5,000 care packages to troops in Afghanistan, with UPS to handle shipping. The packages will be assembled by including NASCAR President Mike Helton, NASCAR Official Partners, NASCAR Sprint Cup Series drivers and crew members. Packages will include a variety of products donated by NASCAR Official Partners, Licensees, and other sponsors, as well as an assortment of items, such as sun screen, lip balm, sore muscle balm and toothpaste packs.

He adds that drivers will sign the "Support Our Troops" tires, which will be auctioned to raise money for troop support. The tires will be sent to bases around the world.