Penney Reaches Out To The Right 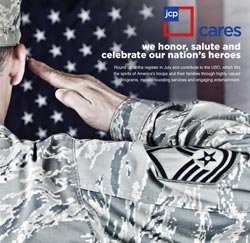 Proving that it can reach out to its red customers as much as its blue ones, struggling JC Penney is launching a new charitable endeavor in partnership with the USO.

The Plano, Tex.-based chain says the effort is called JCP Cares, and will ask customers to round their purchases up to the nearest dollar and donate the difference to a new cause each month. For the kickoff month of July, Penney says it will also donate $1 million to the USO, in addition to contributions generated at Penney registers. The chain also says it intends to donate $1, up to $50,000, every time a customer checks in to a JC Penney store using Foursquare.

Country singer Blake Shelton, best known for such hits as “Some Beach” and “Hillbilly Bone,” will be the ambassador, providing free tickets to soldiers and their families for an upcoming concert at Ft. Drum, N.Y.

JC Penney, which is wrestling with declining sales and a floundering marketing strategy, resulting in the recent dismissal of president Michael Francis, has drawn plenty of attention for more left-leaning moves, including the use of Ellen DeGeneres as a spokesperson and a recent Father’s Day ad featuring two gay dads. The efforts have drawn accolades from gay activists, as well as condemnation from the right.

With this new charitable endeavor, Penney says it intends to embrace a new cause each month. After the USO, which delivered services to more than 3.6 million troops and their families last year, it will focus on 4-H and Boys & Girls Clubs of America in August; Teach for America in September; The Breast Cancer Research Foundation in October; child hunger group Share Our Strength in November; and the Salvation Army and its annual Red Kettle drive in December.

To give these initiatives a chance to grow via social media, it says it is launching www.BroadCause.com, which it describes as “a social media platform dedicated to activating, accelerating and aggregating passionate communities around cause-based initiatives.” And next month, it will introduce a social media game WeTopia, which lets players build a virtual town, and spend “Joy” currency linked to real-world non-profits.

cause-related, retail
4 comments about "Penney Reaches Out To The Right ".
Check to receive email when comments are posted.
Read more comments >
Next story loading