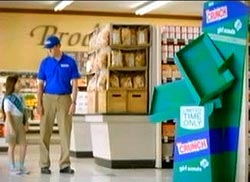 CPGs and restaurants had six of the top-10 best-performing TV ad spots during 2012’s second quarter, according to Ace Metrix.

The top-10 list was led by Samsung’s “For Your Big Life” ad, for its French Door refrigerator, with an Ace Score of 697.

*Lysol’s “The All in One Kitchen Soap,” demonstrating its No-Touch Kitchen Cleaner System (677 Ace Score);

*Nestle Crunch’s ad for its new Girl Scout Candy Bars, showing a Girl Scout saving a Nestle’s in-store rep from being crushed by a hoard of shoppers rushing to buy the new candies (668);

Rounding out the top 10:

*Lowe’s’ “A Fresh New Start” ad, showing a homeowner magically transforming her yard with products carried at the retailer (652); and

*Audi’s “Alien” ad, featuring a child saying her dad’s ownership of a “space ship” -- the advanced-technology Audi A6 -- proves that he’s an alien (651 Ace Score).

All of the top-10 ads can be viewed here.