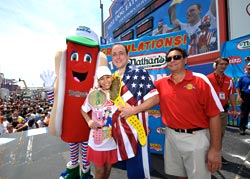 On Independence Day, the demigods of competitive eating converged at the corner of Surf and Stillwell avenues at Brooklyn's Coney Island to shake the world. Yes, it was once again time for the gastronomic fireworks of Nathan’s Famous Fourth of July International Hot Dog-Eating Contest. Somewhere in the neighborhood of 40,000 people were on hand to watch the contest, ESPN carried it, and it is not an exaggeration to say that people all over the world knew about it, and probably ate a little less than usual for a day.

"I just got back from Istanbul, where we are planning to develop a Nathan's, and the first thing people wanted to talk about was the contest," says Wayne Norbitz, president and COO of Jericho, N.Y.- based Nathan's, which has about 268 stores, and whose products are sold at 40,000 locations worldwide. "I was in Moscow once and saw the contest there on a CNN report. We had contestants from Beijing last year, and we have 20 to 30 people competing this year so it generates lots of international interest."

The ascendance of the Nathan's contest, and especially of the idea that stuffing one’s face for 10 minutes is as much sport as entertainment, is due to New York-based Major League Eating (MLE), which promotes and markets the Nathan's event and qualification tour, and a lot of other eating competitions to boot.

That six-time Nathan’s champ, Joey Chestnut, the number one eater in the world, is not far from being a household name says a lot about how MLE has taken what used to be a country fair-type sideshow, with kids covering their faces with the remains of cherry pie, into to a major entertainment program with major brands and a long tail of smaller sponsors.

Chestnut, by the way, matched his world record of 68 hot dogs and buns in 10 minutes on Wednesday against 15 male eaters (an odd term) from the U.S. and Canada vying to grab “The Mustard Yellow International Belt.” Also on hand will be Sonya “The Black Widow” Thomas, won against over a dozen other women.

"From a pure earned-media perspective, it's hundreds of millions of consumer impressions generated each year just from earned media,” says Richard Shea, President at MLE. "And 1.9 million viewers watch the broadcast. It's the biggest [eating contest] without a doubt; it's the Super Bowl, the Master's." The organization, which has "hot dog exclusivity" with Nathan's, per Shea, holds over a dozen Nathan's branded qualifiers around the country each year leading up to the big dog fight.

"We have been doing this for a very long time," says Norbitz, speaking to Marketing Daily from the weigh-in at Coney Island, which was officiated by no less than New York Mayor Michael Bloomberg. Norbitz, who joined Nathan's in 1975 and has been president since 1989, says the audience size for the competition has grown a lot in recent years. "I would say in last 10 to 16 years, this has become much bigger. I remember having contests where there could have been couple of hundred watching."

He says the notoriety and the fact that Nathan's holds regional contests leading up to the championship help build buzz because local news organizations follow their local champs to the boardwalk. "So there's a ground swell." It also helps, he notes, that ESPN started covering it over five years ago.

He says Pizza Hut, and Carl's Jr., Wild Turkey bourbon, Isle Casinos, and Asian company CP Foods are a few of the sponsors of MLE’s worldwide events. "It can be mom and pop up to blue chip."

Meanwhile, Norbitz is circumspect about it all. "It's a funny thing, people are just fascinated by it, and you would think after a while, 'why watch?' but there's just a big interest." He sees it as both sport and entertainment. "For us it's tongue in cheek, a way to celebrate the Fourth of July in New York, and just great fun. We put on a whole show, with music acts, and other spectacles, but I will tell you this:  when those eaters take the stage and that clock starts, it's a competition. They come to win." Don't worry. There will be plenty left on Thursday. The company sold 425 million dogs last year.