Automakers Have Reasons To Light Sparklers 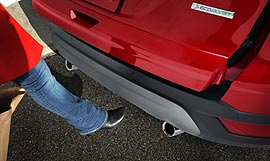 Big fireworks are in order for the U.S. auto business, with June giving almost everyone something to party about. Hyundai posted an all-time June sales record of 63,813 units, up 8% over last year, which was also a record. The company says it counts on the new Veloster Turbo, Elantra GT and Elantra Coupe to keep that momentum going through the summer.

Toyota posted a 54.3% increase compared to the same period last year, with Toyota division getting a 51.7%. Bob Carter, group VP and general manager of Toyota Division said, in a statement, that new vehicles like Prius c, and the Camry drove sales. "We expect to see continued stability in the automotive market during the second half of 2012 thanks to pent-up demand, low interest rates and a continued influx of new products."  Lexus reported total sales of 20,022 units in June, up 79% from the month last year.

Ford's June sales numbers are up 7%, as are year-to-date numbers. A big boost came from sales of the new Ford Escape, which saw a 28% increase in June, which is makes it the best month to date for the vehicle. Mike Gallagher, Ford SUV Communications manager, tells Marketing Daily that the company's marketing efforts focusing on fuel efficiency and features like the hands-free liftgate have been vindicated by purchase stats.

"We are seeing that more than 93% of Escapes are being bought with EcoBoost engines and nearly 48% have been sold with the hands-free liftgate," he says. Ford's Fusion scored its best ever June, with sales up 17%. The automaker said F-Series sales were the best for June in five years.  Overall, Ford cars were up 3%, utilities 9% and trucks up 9%, year to date.

Chrysler posted its best June in five years, and 27th consecutive month of sales volume increases, with 144,811 Chrysler, Jeep, Dodge, Fiat and Ram vehicles delivered during the month, a 20% improvement versus June 2011. Fiat set a sales record for the fifth-consecutive month and the brand's 122% year-over-year sales gain was the largest percentage increase of any Chrysler Group brand in June. The company says more Fiat 500 vehicles were sold during the first six months of this year than during all of 2011.

General Motors said it sold 248,750 vehicles in the U.S., a 16% improvement versus last June, and the highest sales since Sept. 2008. Chevrolet, Buick, GMC and Cadillac all reported double-digit increases, per the company. “Across the board, June was a strong month for GM,” said Kurt McNeil, vice president, U.S. Sales Operations, in a statement. “The combination of new products, available credit, lower fuel prices and modest economic growth was a stronger influence on consumer behavior than economic and political uncertainty."  For the month, GM passenger car sales were up 12%, driven by a 32% increase in sales of the Chevrolet Malibu and a 21% increase in Buick LaCrosse sales. The company says combined sales of all seven Chevrolet, Buick, GMC and Cadillac crossovers were up 30% versus the month last year.