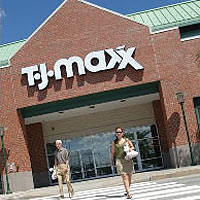 For retailers working either the high end or the low end of the spending spectrum, June was a good month, with both Nordstrom and TJX posting gains well ahead of expectations. But for the mid-tier stores, including Macy’s and Kohl’s, summer didn’t get off to a very sunny start.

Overall, the International Council of Shopping Centers says, U.S. chain-store sales rose by just 0.2% for the month of June, on a year-over-year basis. “Volatility is the word that best describes June,” says Michael P. Niemira, ICSC’s VP and chief economist, in its report. “Weather was one factor that was cited as a drag on the overall performance, but some retailers pointed to broader economic uncertainty as well.”

The ICSC reports that luxury stores led the way, with a 7.6% year-over-year gain in the category. At Nordstrom, same-store results rose 8.1% for the month. At Saks, sales rose 6%, powered by women’s shoes; men’s private brand, tailored clothing, and shoes; as well as cosmetics and fragrances.

Off-price retailers, including TJX, parent of TJMaxx and Marshalls, also did better than expected, as people went bargain hunting. Same-store sales rose 7%, and customer traffic improved at every division, leading the Framingham, Mass.-based retailer to raise its earning forecast.

But in the middle of the retail road, cash registers were quiet. At Macy’s, for example, same-store sales came in at a disappointing 1.2% ahead of June of 2011, “below expectations,” Terry J. Lundgren, its CEO, says in its release. “In part, this was a function of a macroeconomic environment that is stagnant at best, and lower spending by tourists in cities such as New York.” Ongoing renovation in its New York City flagship was also disruptive, he says. (The company is still on target to unveil its renovated women’s shoe department, the world’s largest, next month.)

And sales were flat at the Gap.

At Kohl’s, same-store sales fell 4.2%. “Though June sales were again lower than expectations,” Kevin Mansell, Kohl’s CEO says in its report, “we are encouraged by improved sales in the latter weeks of the month as we continued to build inventory levels.” Men’s and footwear sales were strongest, he says,with the Midwest turning in the best regional performance.