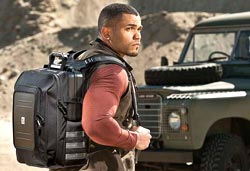 With people buying portable and mobile electronic (smartphones, tablets and their ilk) at ever-increasing rates, they’re now looking to protect their investments. Following that logic, Pelican Products, which has heretofore created protective cases for business markets such as first responders and the military, is branching into the consumer market.

“We’re all very familiar with the last few years, with the explosion of consumer products,” Pelican president and CEO Lyndon Faulkner, tells Marketing Daily. “Everybody’s coming out with personal devices that all need protection. It’s almost essential that the company that makes the best protective cases offers those products for personal devices.”

The new product line, Pelican ProGear, is being introduced to consumers via a marketing campaign that includes consumer-oriented print, television and online advertising, a first for the company. The campaign includes endorsements from so-called “Pelican Pros,” top athletes, explorers and adventurers, including “wingsuit” pilot Jeb Corliss, retired Navy SEAL Craig Sawyer, conservationist and explorer Alexandra Cousteau and Big Water Adventures host Mark Davis. Those endorsers will appear in videos on the company’s newly created website, www.pelicanprogear.com, as well as in the advertising.

“We’ve had to build new initiatives where we’ve gone out and captured people who we think are the essence of what Pelican is,” Faulkner says, adding the company is going after a particularly broad target. “It’s everybody that needs to protect the personal electronics they’re buying.”

The advertising will run in publications such as Wired and Men’s Journal, and on cable networks such as National Geographic and ESPN, Faulkner says.