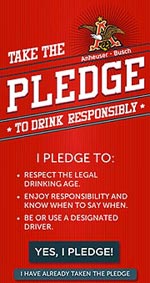 Anheuser-Busch is unveiling its newest responsible drinking campaign which relies on online and social media.

A website, www.NationofResponsibleDrinkers.com, asks adults to pledge their commitment to drink responsibly and then share it through Facebook to encourage friends to do the same. The pledge is three-fold in that it asks users to respect the legal drinking age, enjoy responsibly and know when to say when and be or use a designated driver.

Each pledge is then populated on an interactive map, showing those who have taken the pledge in their communities.

The St. Louis-based company first launched a responsible drinking program 30 years ago with its now iconic “Know When To Say When” campaign.

"With close to half a billion adults on Facebook, we see an enormous opportunity to expand our reach to newer generations of adult drinkers -- most of whom came of age after 'Know When to Say When' and our earlier responsible drinking campaigns," said Kathy Casso, vice president of corporate social responsibility for Anheuser-Busch, in a release. "We're looking to the future of alcohol responsibility, and we see the potential in social media -- with its ability to bring adults together and peer-to-peer persuasion -- to help friends and family make smarter choices."

The campaign ran for more than a decade and included TV, newspapers, magazine, radio and billboards. Other Anheuser-Busch responsibility campaigns including “We All Make A Difference,” “Wanna Go Home With Me Tonight?,” “Who's Your Bud” and “Responsibility Matters” have featured sports figures, including Dan Marino, Wayne Gretzky, Patrick Ewing, Oscar De la Hoya, Payne Stewart and music stars George Strait, Tim McGraw and Nelly.