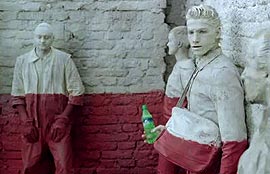 Sprite is rolling out a new global campaign that uses a visual camouflage metaphor to convey that the soft drink brand is a way for teens to express their “true selves.”

The 60- and 30-second spots, from BBH New York and BBH Shanghai, were shot in Prague, the Czech Republic.

More than 20 actors were hand-painted in light-gray paint to blend in against gray buildings and other drab backgrounds in the city, giving them a rigid, stone-like appearance. In the first spot, a male teen sheds his “camo” by drinking Sprite, stirs the curiosity of those still encased in their camouflage, and ultimately meets up with a female teen who has likewise broken out of the conformist environment by drinking Sprite.

Jonathan Mildenhall, global VP, content excellence for Coca-Cola Company, described the creative as “an insightful invitation to teens all over the world to feel comfortable about being themselves,” dramatically conveying the brand’s core message of authenticity.

The metaphoric storyline and the use of hand painting were conceived as ways to make the spots visually memorable and meaningful across global cultures, explained BBH New York chief creative officer John Patroulis.

In addition, the brand has posted a video on YouTube showing behind-the-scenes footage of how the spots were created, with commentary by the marketing and creative team.