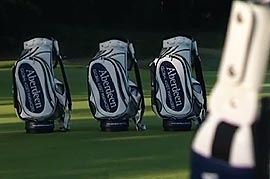 Aberdeen Asset Management is supporting its sponsorship of the Scottish Open with a TV spot that will run in the United States and Europe.

The 30-second spot explains Aberdeen Asset Management's involvement as a sponsor of a number of Scottish golfers. The spot opens with beautiful aerial photography of the Castle Stuart course where the Scottish Open will be played next week and then introduces the company’s sponsorship of the Scottish Open.

The TV commercial is narrated by Scottish broadcaster Bill Torrance. His other voiceover campaigns have included Air Canada and Rolls Royce.

The advertisement will also run on U.S. business channel, CNBC. In the UK, the TV ad will be aired on various Sky channels and STV beginning on July 12.

The Scottish Open will also be broadcast in the UK (BBC and Sky) with highlights shown in Europe and Asia.

The spot aims to support the company’s strategy of raising its profile in the U.S., said Martin Gilbert, chief executive of Aberdeen Asset Management.

“Supporting the Scottish Open enhances our existing golf portfolio and is a natural progression in our support for golf globally,” Gilbert said in a statement. “The international reach of the tournament is of great appeal, as we seek to continue building the Aberdeen brand in the USA and across Europe.”

Aberdeen Asset Management PLC, the parent company of Aberdeen Asset Management Inc., is an independently-run asset manager listed on the London Stock Exchange since 1991, and operating from 31 offices in 23 countries. The company invests on behalf of institutional and wholesale clients, primarily in equities, fixed income, alternative investment strategies and property.

Aberdeen Airport is the third largest airport in Scotland handling over 3.16 million passengers a year, which was an increase of 10.9% on figures for the previous year. The airport has one main passenger terminal, serving charter and scheduled holiday flight operators.