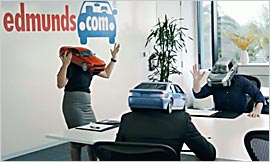 When people who have cars for heads get into arguments, they don't yell -- they honk at each other. At least they do in the first-ever TV spot for auto shopping and research site Edmunds.com. The point of the new integrated campaign for the Santa Monica, Calif.-based company is that real people (albeit people with cars for heads) do the writing, research, reviews, chats, customer assistance and product comparisons at the site. The first-ever integrated campaign, via New York-based Kaplan Thaler Group, also introduces a new tag line, "Ask the Car People."

Edmunds.com VP of marketing Michelle Denogean tells Marketing Daily that the purpose of the campaign is to drive the kind of exponential growth that Edmunds achieved in its early years. "Over the past couple of years, our growth has been steady but not the kind we used to enjoy," she says, adding that the company -- which gets about 18 million uniques per month -- has done fine just from word-of-mouth and spillover from automakers' own campaigns. "Whenever companies advertise, or launch a new campaign, we get dramatic traffic lifts to our site, especially during events like the Super Bowl."

The company publishes market research on Super Bowl ad effectiveness based on when and how much traffic comes to the site on and after Super Bowl Sunday.

The campaign, intended to appeal both to new and used car shoppers, also spotlights Edmunds' free shopping and research tools, per Denogean, who says the TV ad will run initially in four markets including Pittsburgh, Providence, R.I., and Raleigh-Durham, N.C.

It is supported by a series of online display ads, search placement, and Edmunds.com’s Facebook, Twitter and Google+ pages, and in Edmunds.com’s video library. The campaign also provides a new, offbeat look at Edmunds.com employees and office culture.

While the online car shopping sandbox has become crowded in recent years, the younger players are also small. Thus, Denogean says, competitiveness is not as much a driver for the campaign as positioning. "The newer sites aren't as robust, and the established competitors haven't changed. The problem is that peoples' ability to differentiate between sites is not as high as you would hope."

She adds that a television focus allows Edmunds.com to talk about its people-ness with a bullhorn. "Television lets us show how we are different versus everyone else. It's about showcasing the human element of the company; that we have so many people -- so many experts behind the scenes -- helping shoppers."

The ad was shot at the company's headquarters, with a mix of actors and real employees, per Denogean, who says it will roll out to other markets on a spot-media basis over the year.

"The essence is that [for consumers] the online auto shopping experience seems a little clinical and not unique," adds Denogean. "And if you look at [competitors'] TV campaigns, they are not focused on humanizing their sites but on data and what you get from it, rather than showing what's behind it. What we are doing is a bit like opening the curtains."