Chevrolet Takes 'Risky' Out Of Business 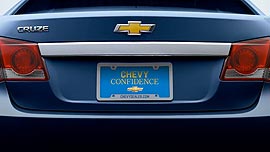 Chevrolet is doing something new. Well, it's new for the auto business: If you don't like it, bring it back. Say what? They do that at Barnes & Noble, and Amazon -- they do it at the corner store if the manager likes you. But cars? And you don't have to bring it back the day -- or even the week -- or actually even the month you drive it away.

The program, Chevy Confidence, covers all the 2012 or 2013 model-year vehicles. In essence, customers can return vehicles bought during the program, with less than 4,000 miles driven and no damage, 30 to 60 days from the purchase date.

The company is pairing it with a “Total Confidence Pricing” program in which all 2012 model-year Chevrolets will be offered at preferred prices in addition to all current vehicle-specific incentives.

It's a bit like what Hyundai did back in the early-2000 era with the best warranty in the business at the time. It serves as a proxy for vehicle durability, quality, and experience for consumers with a negative perception, who need something to give them a nudge.

Still, both Chris Perry, Chevrolet global VP marketing, and Joel Ewanick, global marketing chief, have been gone from Fountain Valley for a while -- but one might think the new Chevy program tears a page from a book they helped write. The Hyundai Assurance program, launched in the midst of the recession, allows you to return a vehicle if you were laid off or have experienced other major setbacks.

Perry tells Marketing Daily that it comes down to giving consumers the confidence to stroll on into dealerships -- something the company could not have done a few years ago, before it had Cruze, Sonic, Volt, the new Malibu, and other vehicles. "It's about taking the risk away for consumers. That's what Assurance was about, reducing the risk for consumers worried about whether they'd have money. The return guarantee is the same thing: If you have concerns, bring it back."

Chevrolet is launching an ad campaign to tout the program. The ads show customers at retail, flipping coins on the dealer: they say what price they will pay. Perry says the campaign breaks July 10 during the MLB All-Star Game.

Jesse Toprak at TrueCar.com offered his take on the program. "The buyback program is an indication of how confident Chevrolet is in its new product lineup. It is a way to get people into showrooms and experience firsthand the significant investments the dealer body has made in recent years."

Toprak said the program will help bring consumer perception more in line with reality, especially in the coastal metropolitan markets (Los Angeles, for example), where consumers drive Japanese and Korean brands. "No Haggle Pricing aims to eliminate the most stressful part of the car-buying process -- stressful negotiations. Although not nearly as attractive as the Employee Pricing, the Preferred pricing-based current program ensures every customer pays the same price with no haggle -- the same price GM offers to its suppliers. Similar programs have been quite successful in the past and we expect Chevrolet to get a decent boost from this promotion for the next couple of months."