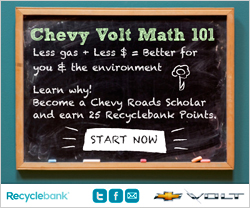 Some products need less bombast and more focus. When you're marketing a pricey high-technology, eco-friendly car, you might pocket the TV money and go with an eco-conscious vertical. The Chevrolet Volt, for example, at around $40,000 a pop, is not going to be a mainstream vehicle just yet. But the automaker would like the message embodied in the car to be mainstream: über-green electric vehicles are going to be all over the place soon, and hey -- Chevrolet makes ’em, too.

The automaker has lately been advertising the Volt gas-assist electric car with ads featuring real owners (although not actor Leo DiCaprio, who has moved up and away from the hoi polloi and their hybrids to the ultra-expensive and troubled Fisker electric car). Now the company is going after a potential pool of five million eco-oriented consumers who check into Recyclebank.com to get points for educating themselves on green living, and making green lifestyle choices.

The six-year-old Recyclebank essentially offers rewards to people when they opt in to learn about personal choices that can benefit the environment. Chevy’s partnership with the site, via Chevy's agency SS+K, involves a co-created digital module on Recyclebank.com that explains the Volt, how it works, how it's eco-friendly, and how it saves resources. The effort, which launches late this week or early next, uses a game called "Volt Math" wherein participants earn points by playing that can be exchanged for branded merchandize, donated to a local or national charity/social cause and give social status and recognition. Chevrolet will also advertise the Volt on the site.

People earn points on Recyclebank by taking an actionable pledge, like pledging to drive a hybrid, to carpool, or to decelerate slowly. Recyclebank and Chevy can then calculate the impact these pledges are having on the environment, illustrating that small choices make a big difference. Chevrolet says it hopes to get word of mouth by activating against Recyclebank’s "Eco Ambassador" network, comprised of 300-500 socially active people. And Chevy is plugging Recyclebank into its Volt network, whose members can earn Recyclebank points for joining the Chevy VoltAge community, for watching Volt intuition videos, for posting on community forums and for downloading Volt content.

Samantha Skey, chief revenue officer with Recyclebank, says Chevy is the first automaker to have such a program with the site, which has partnerships with companies like Coca-Cola, Procter & Gamble, and Johnson & Johnson. "Their agency did come to us because they knew our focus is on how you show aspects of sustainability to mainstream consumers," she says. "We were linked by the agency and then we formed a relationship with the brand and it took off from there. She tells Marketing Daily that Recyclebank offers two sources of value. One is access to the “community of the eco curious,” the five million or so mainstream consumers who participate at Recyclebank.

"But the more critical value is use of our currency and rewards marketplace. We are creating several experiences that invite people to learn about the Volt and receive points. Use of currency is most attractive because it drives engagement. It's incentivized media, but where we do well is in driving the connection between mainstream products and service, and a sustainable living agenda. So we are often used by brands who want to showcase sustainability but for whom that is not necessarily part of their DNA."

Skey concedes that while an inherent problem of incentivized engagement is the false loyalty of some site visitors there just to get free stuff, "We are very rigorous about making sure we have long-term engagement among users. If we don't see consistent engagement longitudinally we calibrate to driving loyalty and not one-off interaction." She says, for example, that participants can't get a lot of points for doing just one thing. "So there might be ten things you have to do. There might be a low barrier to entry for engagement offering maybe ten points, but in order to purchase a reward from the market, you might need 50 points."

She says Recyclebank tries to strike a balance between reaching hand raisers interested in corporations who are creating more sustainable products, and at the same time reach mainstream consumers who aren't raising their hands, and don't know that they don't have to give up [vehicle] performance."