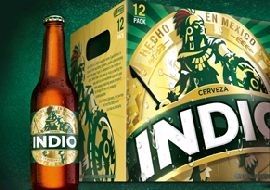 The 12-oz. bottled dark beer, known for its malt character and light caramel aroma, will be at on and off-premise locations in 6-pack and 12-packs.

"Market segmentation continues to have a major impact on the industry and Indio will use this trend to create a very specific campaign that speaks directly to the niche audiences' interests and passions in life," said Felix Palau, VP of marketing, Indio, in a release.

According to a recent study by NBC Universal, Telemundo and Starcom MediaVest Group, there are five million multicultural millennial consumers in the U.S. who are characterized as confident, self-expressive and receptive to new ideas and ways of living. Indio will be targeting these Hispanic men 21-26 years old and creating a platform that celebrates their individuality and reflects their passion for blending the best of their cultures.

Non-traditional marketing efforts were designed to mirror the consumer and will include online communication, digital advertising, out-of-home postings and murals and influencer sampling. Creative was developed by Olabuenaga Chemistri and placed by MediaVest's MV42 Degrees.

As part of the brand's pre-launch strategy, Heineken hosted "The Indio Experience," a road show for distributors and retailers to introduce the brand and offer insight into its target audience. This experience immersed attendees into the passion of Indio's consumer through live performances from DJs and bands, language tutorials, and brand sampling.

Launched in 1893 under its flagship brand, Cuauhtemoc beer, the label featured an Aztec emperor. Soon after, the general public started identifying the brand by the image of the label, saying: "Give me a beer of the Indian," which is how the brand was renamed Indio in 1905.