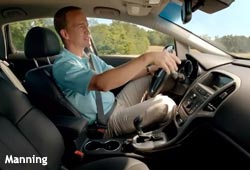 Buick has used Shaquille O'Neal, actor Ving Rhames, and model Marisa Miller in its ads. Now it's going to the gridiron to tap Peyton Manning, QB for the Denver Broncos. Manning is appearing in TV spots for the 2012 Buick Verano luxury sedan.

The ad, which broke during this year’s ESPY Awards on ESPN on Wednesday, has Manning taking on his quarterback persona to talk to OnStar Turn-by-Turn navigation. It also calls out the IntelliLink telematics feature that links to navigation, phone and entertainment functions via intuitive voice commands. Manning was also a presenter at the ESPYs.

Although the spot broke nationally, it joins Buick's other celebrity-centric ads as part of Buick's effort to achieve a consistent look and feel to its dealer-group local market areas. "These were created for the regions and dealers to use so we get a consistent message, look and feel for all of our commercials, whether national or dealer body," says Buick spokesperson Nick Richards. He points out that each of the spots, all of which are running concurrently, offer a humorous take on the featured celebrity's lifestyle to spotlight specific vehicles and attributes.

"In each we highlight what the celebrity is known for. So we started in March with an ad for the Lacrosse with Shaq," he says. "We used him as an authority on size, with the whole point being you can get this fantastic fuel economy in a full-sized sedan."

The ad with tough-guy actor Ving Rhames had him touting the Buick lease and how simple it is at retail. He puts on his "Pulp Fiction"-type persona at a dealership to demand his Buick with two years free oil, service, OnStar and XM Satellite, hoping for some pushback and is chagrined when both he -- and then the guy across the showroom -- get all of that.

The ads are all tagged to promote the Experience Buick lease program and they all conclude with: "If you didn't know [the spotlighted Buick vehicle and feature], you don't know Buick."