Samsung Plays From The Road 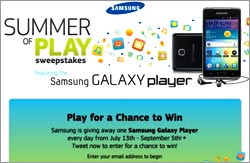 Samsung Electronics wants to make its Galaxy Player devices synonymous with the fun and games of summer through a national promotional tour it is calling the “Summer of Play.”

Via a “FunCruiser” that will be making stops all over the country in the coming weeks, Samsung will look to link its media players with fun and games through pop-up comedy routines and improvisational skits that play up the device’s features and capabilities (think “Angry Birds” recast as an acrobatic dance). Through these events -- which begin this week in Boston, with stops in New York, Chicago, and Minneapolis before ending in Los Angeles with an appearance on ABC’s late-night show “Jimmy Kimmel Live” -- consumers will have the chance to get first-hand experience with the Galaxy devices.

The promotion will also include a social media component in which brand fans and followers can share their ideas about their ideal summer day of play. The brand will award a Galaxy Player a day to an entrant, and one grand-prize winner will have their dream summer day brought to life. The brand will also post photos of fans having summer fun on Samsung’s Tumblr page.

"Samsung's Summer of Play lets us bring the core of our new Galaxy Players -- play! =– on the road, giving our fans the opportunity to disconnect from the hectic days of summer and just have fun with the Player's amazing features," said Travis Merrill, director of product marketing, Galaxy devices, Samsung Electronics America, in a statement. "Whether it's music, video or gaming, our new Galaxy Players enhance the fun for any experience, and what better way to showcase them than on a nationwide road trip?"