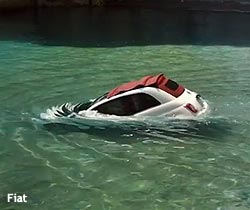 If they gave automotive brands a Green Card, Fiat would be the latest to get one. The sibling brand of Auburn Hills, Mich.-based Chrysler LLC is making its Italian passport central to a new campaign, the first real brand campaign for Fiat, since it includes the three-vehicle portfolio.

The campaign, titled “Immigrants,” centers on a 90-second ad that breaks July 16. The ad, featuring the 500, the 500 Cabrio and the Abarth performance version of the diminutive car, has the vehicles diving from cliffs and rolling down beaches into the sea. Shot on the drop-dead-gorgeous Amalfi Coast and in Sorrento, the spot shows the cars vanishing into the waters, then after having presumably motored submarine-style across the ocean, reappearing on the streets of New York (at precisely the time of year when New Yorkers wish they were on the Amalfi Coast, one might add.)

The spot is set to versions of the song "Torna a Surriento." During the section shot in Italy the song is performed by Italian-American singer and dancer Arianna; when the cars get to the U.S. the Cuban-American rapper, actor, and entrepreneur Pitbull (Armando Cristian Pérez) takes over. The ad, via Dallas-based The Richards Group, will air on national cable and network rotation, as well as in cinemas and on Fiat's Web properties.

Casey Hurbis, head of advertising and communications for Fiat North America, tells Marketing Daily that the Richards Group -- which did Fiat's "Seduction" Super Bowl spot this year -- joins a roster of agencies Fiat has used in the U.S. Doner, for example, helmed a couple of spots, including the "House Arrest" ad for the Abarth car that starred Charlie Sheen. Hurbis says Arianna was a natural choice to sing the song in the new ad, as she had performed at the Fiat national dealer meeting.

"When we started looking at this concept and the idea of the campaign we saw it as an opportunity to tell yet another chapter in the story of Fiat's resurgence,” says Hurbis. “We have had several good sales months and an exciting story to share, so now just seemed like the perfect time to debut something like this." While Fiat advertising tends to be creatively diverse, depending on the needs of the moment, Hurbis says brand CEO Olivier Francoise stresses that Fiat campaigns should be smart, sexy, stylish and fun. "We worked off of that, and obviously the story of Fiat coming back to the U.S. after a 25-year hiatus."

The company is also running a summer experiential campaign involving mall tours and seven street teams in each of Fiat's sales regions. The program is centered on vehicle demos and test drives to bolster Fiat's 160 or so dealers, whose stores Fiat calls "studios." "We have a comprehensive activation going on now," says Hurbis. "We are about six weeks into it and it's bearing great results. It's six days a week and ten hours per day."

Brand awareness has seen hockey-stick growth since last year, rising from 9% last fall when the company launched ads starring Jennifer Lopez to over 45% now. Paradoxically, the critically panned J-Lo ad lit a fire under the brand, based on Edmunds.com's dipstick of consumer traffic on its site. Says Hurbis: "For us, building awareness is key."