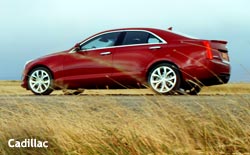 Nobody wants a new disease to present itself to humanity, but it would be great for Cadillac if a new ailment -- let's call it Three Fatigue -- were to strike, say, today.

That's because this morning GM's luxury brand Cadillac launches its biggest media juggernaut ever for the ATS, a vehicle that Caddie is hoping to drive right up the tailpipe of BMW's 3-Series car, a vehicle that has dominated the luxury segment for small sedans for 30 years. The ATS is a vehicle Cadillac has needed to get beyond its Midwest breadbasket to markets in which the brand hasn't done well in recent years: Northern and Southern California, New York and the Northeast.

But how do you get younger, coastal luxury prospects who like their compact luxury cars imported from across the pond interested in a compact Cadillac performance sedan? Paint messages about the vehicle's dynamics and technical wizardry on a global content canvas, where the content implies the ATS' global ambitions while hooking prospects up with the kind of Web video they like and share. We're talking footage about people doing crazy stuff in exotic locales (hey, if it works for Red Bull, Tom Cruise and James Bond, why not Cadillac?)

The campaign, "Cadillac ATS Vs. the World," via Minneapolis-based Fallon, launches with the kind of awareness-building media juggernaut around the London Olympics that a new vehicle in a new market segment pretty much requires. GM's global marketing chief Joel Ewanick says the Olympic media rotation with NBC was locked in two years ago, along with a big digital buy in the 20 top markets intended to lock out subterfuge tactics by competitors.

Molly Peck, director of Cadillac advertising and sales promotion, who came to the division from Chevrolet where she launched the reborn Camaro and the Volt, says the young affluents to whom Cadillac hopes to appeal will be drawn in by the locations and back story. "This is the biggest content play we have ever done." She adds that Cadillac's ATS site and social channels will have some 40 ads and online video "from specific footage focusing on product features, down to the other end of spectrum with content about the places."

In brief, the campaign puts the ATS and a charismatic driver/passenger duo on extreme-driving conditions in Patagonia, the Guoliang Tunnels in China (a 13-foot-wide road cut through solid rock hundreds of feet above the valley); the Grand Prix circuit in Monaco; and the Atlas Mountains of Morocco. Peck says the sites were chosen from a list of 20 and China was going to be one of them, per Ewanick, because that is now Cadillac's second-largest market.

The effort launches online starting this week with TV ads in 60- and 30-second sizes set to break during the Opening Ceremony of the Olympic Games on July 27. Peck says the effort comprises some 400 hours of video footage and photography. Fallon brought in Academy Award-nominated documentary filmmaker Joe Berlinger, and filmmaker Jeff Zwart. The driver in the spots is Derek Hill, a champion race driver and son of Phil Hill, the only American to win the World Driving Championship. American actor and filmmaker Ross Thomas sits in the right seat and serves as host while he isn't clenching his teeth in terror or whooping it up during driving sequences.

The BMW 3-Series is implied in the ads, even mentioned once or twice. And later there will be an ad or two that overtly calls out the 3-Series. "When our engineers designed this car, the goal to make it difficult to not consider ATS. Our job is awareness and consideration," says Ewanick, who once worked at Lexus' agency El Segundo, Calif.-based Team One. "We are taking a page out of the Lexus handbook: spotlighting the details of car as way to justify purchase."

The TV ads are intended to bring consumers online to learn more about the ATS and get more documentary content about the places where they went to shoot. The content -- housed on Cadillac's ATS site -- includes, for example, a documentary short about a huge Kung Fu school near the Guoliang Tunnel, which runs past the province where Kung Fu was born. The hosts kick their own asses because they can't quite handle the batons.

Talking points about the car are integral to settings: the ads shot in Patagonia, which (as anyone knows who has read Antoine de Saint-Exupéry's "Night Flight") has the worst winds on God's Earth, call out ATS’s aerodynamics. In Morocco, Hill drives the ATS down a switchback road in the Atlas Mountains. The car's Magnetic Ride Control is demonstrated in the China ads.