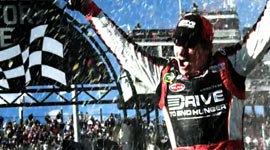 The organization says it got 110 proposals and 75 sets of credentials from agencies, narrowed it to a list of fewer than 10 firms, and then hit the road with NASCAR brass to visit them. "In June, a trio of finalists – Leo Burnett, Ogilvy & Mather and McCann Erickson North America – presented to a group of senior leaders, including NASCAR Chairman and CEO Brian France," says a NASCAR release.

Said Kim Brink, NASCAR managing director of brand, consumer and series marketing said, in a statement, "We were thoroughly impressed with the caliber of all three finalists; but Ogilvy's consistency, creativity and dynamic leadership were the key differentiators. We're delighted to join the agency's roster of big consumer brands."

John Seifert, chairman and CEO of Ogilvy & Mather North America, said NASCAR's strengths are in how it "blends marquee stars, jewel events, and some of the fiercest competition on the planet with an intricate ecosystem comprised of historic tracks and compelling personalities."

O&M will replace St. Louis-based Jump Company, which early this year launched a campaign arguing that next to NASCAR, "Everything Else is Just a Game." Creative demonstrated how mundane affairs get a jolt with a little NASCAR-style passion. One spot posited a rental car as a NASCAR racer. Another showed how a celebration with Champagne takes on huge meaning at the finish of a NASCAR race, complete with fireworks, geysers of bubbly, winners doing donuts and leaping through smoke and confetti. Jump creative has also offered a backstage look at how the Nationwide Series has evolved with creative showing fans tooling around race team garages in a Hollywood style tour tram.

NASCAR, whose race rosters are divvied into three series -- Sprint Cup, Nationwide and Camping World Truck Series -- says it has more of the top 20 highest-attended sporting events in the U.S. than any other sport and is the second highest rated regular-season sport on television. Races are broadcast in more than 150 countries and in 20 languages, per the organization. Early this year NASCAR, which has over 40 official sponsors, signed a yearlong ad-spend deal with USA Today, the first such deal in six years between the sanctioning body and the media company. USA Today isrunning NASCAR sections timed with major races like the Daytona 500.