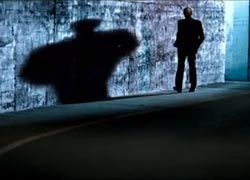 In addition to its usual glitzy TV effort, the Academy of Television Arts & Sciences nominated five TV commercials for an Emmy. It's the 15th time it has done so. The awards will be presented in September.

Included in the mix is the high-profile and controversial "It's Halftime In America" spot for Chrysler featuring Clint Eastwood. This comes from Wieden + Kennedy. The commercial gained  notoriety airing in the Super Bowl earlier this year. It is one of three spots nominated for W&K.

Deutsch LA got two nominations, both for its critically acclaimed Volkswagen campaign. "The Dog Strikes Back," focuses on an out-of-shape dog looking to up his fitness level, chasing a Volkswagen.

Another, "The Bark Side," features a chorus of dogs barking out the theme from "Stars Wars," which tips its hat with another Deutsch commercial, a Super Bowl spot featuring a "Stars Wars"-minded kid who is looking to work some magic on a VW.

Two other Wieden + Kennedy commercials made the cut as well. One is called "Best Job" for Procter & Gamble corporate branding, which shows tireless efforts/support from mothers all over the world getting their sons/daughters ready and trained for Olympic-like contests.