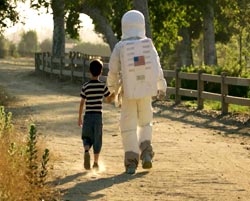 Any parent who owns a tablet knows how much kids love them. But many of those parents also know that turning over a high-end electronic device to a toddler is almost inviting trouble.

Enter Nabi, an Android-powered tablet created especially for kids, with a special soft case designed to survive small drops and pre-loaded with apps specifically designed for kids and safe Web-browsing features. The device, which was introduced last year, is launching its first advertising campaign via mOcean this week.

“There are a lot of tablets on the market, but there aren’t many that are made for kids that are adult grade tablets,” Mike Braue, director of client services, consumer brands at mOcean, tells Marketing Daily. “This is for kids who want what their parents have in terms of an Apple-type experience.”

A television commercial in the campaign depicts the wonder and potential a tablet can open up for children. A boy walks down a country path holding the hand of an astronaut in a space suit, another faces off against a Shaolin warrior, and a girl assists in a surgical operation with a stuffed bunny. “To you, it’s a tablet,” says a woman’s voiceover. “To them, it’s the world.”

“We wanted to open a dialogue with moms to let her know this is a tool that can help her enrich her kids’ lives,” Braue says. “This is an experience that you can share with your kids and better monitor what they’re doing.”

To create the spot, Braue and mOcean drew upon the agency’s history of creating movie trailers for Disney and other studios to craft a story that appeals to both kids and parents alike, he says. “The idea is that this is something that is an entertaining experience. It wasn’t like telling the story with a bunch of screen grabs. It was more about the world you’re transported to, and we understand how to tell a story that is non-traditional and allows you to escape.”

Though the spot targets moms, it will be running on kid-oriented cable networks such as Nickelodeon, Sprout and Disney XD during the day (as well as some more mom-specific programming in the evenings). “We’re running on kids media because it’s an efficient way to reach moms,” Braue says.

Braue notes that the Nabi is a full-fledged, Android-powered tablet akin to a Kindle Fire and not a “kidified” product. In the product’s first year last year, it sold out during the holiday season, he says. But rather than wait for the holiday advertising to begin this year, the brand opted to launch an advertising campaign this summer to take advantage of the brand’s first-mover status in the category.

“There’s a lot of competition from the big tablet makers that’s right around the corner,” Braue says.  “We have word of some of that competition that’s coming and we want to make sure that we’re first to market with a tablet of this caliber.”