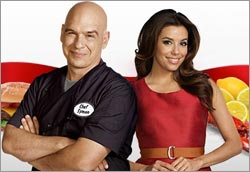 Lay’s Potato Chips is teaming up with actress Eva Longoria and Iron Chef Michael Symon to invite consumers to create the next great potato chip flavor.

The contest invites fans to submit their potato chip flavor ideas for the chance to win $1 million in grand prize money or one percent of their flavor's 2013 net sales (whichever is higher). From now until Oct. 6, consumers can share their flavor inspirations on the Lay's Facebook page, with the winning flavor being revealed in 2013, the year Lay's celebrates its 75-year anniversary.

Consumers can also enter the contest via cell phone by texting FLAVOR to CHIPS (24477). To submit a suggestion, fans will be asked to provide their name, flavor name, up to three possible ingredients and a 140-character description or inspiration for their flavor.

The "Do Us A Flavor" contest launched July 20 in Times Square at the first-ever Lay's brand flavor store. Visitors can sample up to 20 existing Lay's flavors. Actress and restaurateur Eva Longoria, and celebrity chef and restaurateur Michael Symon were on hand for the launch.

Longoria and Symon will be part of a judging panel made up of chefs, foodies and flavor experts who will narrow down the contest submissions to three finalist flavors. In addition, the two will appear in national television and online advertising, as well as a retail marketing campaign to support the contest.

Longoria is a cookbook author, philanthropist and the owner of Beso eateries in Los Angeles and Las Vegas known for their eclectic menu of colorful and tasty dishes from around the world. Originally from Cleveland, Symon is the current co-host of the ABC daytime talk show "The Chew" and appears on the Food Network's "Iron Chef America" and Cooking Channel's "Symon's Suppers." He is also the owner of four award-winning restaurants: Lola, Lolita, Roast and B Spot, as well as the recently opened Bar Symon inside Pittsburgh International Airport.

Consumers in need of additional inspiration can use Chef Michael Symon's "Flavorizer" app, which scans the individual's Facebook timeline to recommend ingredients that are most unique to him or her.

Three finalist flavors will be fully developed by Frito-Lay's culinary experts and unveiled in early 2013. Then, it will be up to fans to vote for the finalist flavor they love most with the winning flavor being revealed in May 2013. The two runner-up finalists will each win $50,000 in prize money, with the grand prize winner taking home $1 million or one percent of the 2013 net sales of the winning flavor (whichever is higher).