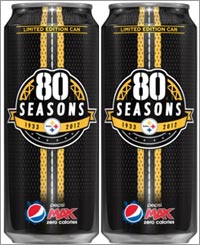 PepsiCo has signed a multi-year agreement to be the exclusive provider of soft drinks, salty snacks and “sports fuel” at the Pittsburgh Steelers’ home stadium, Heinz Field.

The deal, whose financial terms were not disclosed, brings the Coca-Cola Company’s four-decades-long relationship with the Steelers as its exclusive non-alcoholic beverages provider to an end.

As Coca-Cola’s contract expired, the Steelers negotiated with both companies. PepsiCo won over the Steelers with a deal that opens opportunities across the whole PepsiCo North America portfolio, including Frito-Lay, Quaker Oats, Gatorade and Tropicana, as well as Pepsi. Frito-Lay and Gatorade already had relationships with the Steelers.

PepsiCo will have exclusive selling, dispensing and serving rights at Heinz Field; fixed stadium signage; venue and team sponsor assets; integration into the team's mobile, TV and digital assets; and local media and retail promotional opportunities. The stadium conversion will be complete by the start of the Steelers' 2012 season. PepsiCo beverage brands have already replaced Coca-Cola brands at the stadium.

Most of the co-marketing creative specifics are still being worked out; however, the partners did announce that PepsiCo will introduce a limited-edition commemorative Pepsi MAX can in honor of the Steelers' 80th anniversary, to be available throughout Pennsylvania beginning in the fall.

Southwestern Pennsylvania is a major market for Pepsi, the brand’s director of sports marketing, Todd Kaplan, confirmed to the Pittsburgh Post-Gazette.

Kaplan also noted that the NFL is a key strategic partner for PepsiCo. That means that, if the Steelers were to win the Super Bowl, PepsiCo could freely leverage the Bowl in marketing efforts.  As the Post-Gazette noted, when the Steelers won the Bowl in 2009, Coke couldn’t use the term “Super Bowl” on commemorative cans.

PepsiCo North America Beverages CMO Simon Lowden said that the Steelers “share our creative marketing vision,” and that the two will work closely on new initiatives.

Steelers president Art Rooney II described PepsiCo as a “world-class company with a unique understanding of sports and what football fans want.”