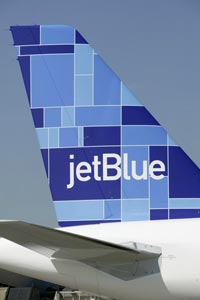 JetBlue Airways is rolling out TrueBlue Mosaic, an enhancement to the carrier's existing customer loyalty program.

Members will also be able to take advantage “Free Even More Speed,” which will provide expedited security at 36 airports for everyone flying on the member's reservation.

Other perks include the ability to use TrueBlue points to upgrade to seats with extra leg room and access to a dedicated 24/7 customer service line.

A special introductory gift of six seat upgrades will be given to TrueBlue members who earn the Mosaic badge in 2012. Current TrueBlue members eligible for TrueBlue Mosaic will be notified and automatically enrolled in the program this fall.

"We've applied a fresh approach to member recognition with the introduction of TrueBlue Mosaic, offering those who fly with us the most increased ease of travel, while still maintaining excellence in product and service for all," said Dave Canty, JetBlue's director of loyalty marketing, in a release.

Mosaic is named after one of JetBlue's tailfin designs. It describes the way in which the airline views its diverse customer base, as people from all different walks of life and traveling for different reasons -- business, vacation, visiting friends and family -- with the opportunity for all to benefit in the same way when they book JetBlue as their airline of choice.

TrueBlue, JetBlue's loyalty program, is free to join and includes the ability to use points for any seat on any JetBlue operated flight -- no blackout dates.