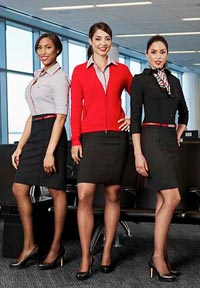 Looks like Banana Republic is moving from “Mad Men” to “Pan Am,” designing the new uniforms for Virgin America. The collection, which will also be offered to earthbound consumers as a limited-edition line, sports a vibe Banana refers to as “utility chic,” and combines modern styling with an aviator’s practicality.

Both the retailer and the airline will promote the pieces, which debut in skies and in stores in early August, with an “Upgrade your style” campaign.

“The new uniforms needed to be modern, clean and sleek in keeping with the Virgin America brand and cabin design, but also adaptable,” Virgin explains in its announcement, “with performance fabric for long travel days, stretch and extra room to meet the demands of airport and aircraft environments, and a variety of pieces to meet weather conditions all over the country.”

“Since the golden age of jet-setting in the 1960s, in-flight fashion has often been elusive in the U.S., but we hope to bring a little of it back to the skies with these new designs,” Luanne Calvert, Virgin’s marketing VP, says in its release. “These new uniforms really represent the next stage of evolution of in-flight fashion, incredibly practical and designed for the modern work world – but with a nod back to the stylish golden age of air travel.”

For men, styles include leather jackets, lined mac coats, striped sleeve sweaters, woven shirts and pants. And for women, pieces include a classic pencil skirt, slim dress, trousers, leather jacket, and a trench. All looks include classic aviation touches, such as shoulder tabs and button chest pockets. The collection also includes aviator sunglasses, luggage, and even a cabin apron with airline graphics.

The new uniforms will be worn by the airline’s 2,000 in-flight and airport teammates, and pilots, and hit the runway on Aug. 8, the airline’s fifth anniversary.

The design process took 18 months, and included an internal design smack-down, with Banana designers competing for the chance to work on the project.

In the past, Virgin and Banana partnerships have included live-, in-flight fashion shows, and in-flight makeovers.