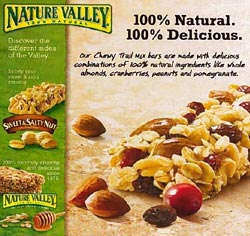 The Center for Science in the Public Interest (CSPI), acting as co-counsel, Thursday filed a lawsuit on behalf of two California women and other California consumers, alleging that General Mills' Nature Valley brand has deceptively used "natural" claims in marketing many of its products.

The suit, filed in U.S. District Court in the Northern District of California, names California residents Judith Janney and Amy McKendrick as plaintiffs, and seeks class-action status for all consumers in California who have purchased the products at issue in the past four years.

It contends that Nature Valley's "natural" marketing positioning is deceptive because many of its products contain or contained “non-natural, highly processed ingredients” such as high-fructose corn syrup (HFCS), high-maltose corn syrup (HMCS) and maltodextrin.

It maintains that “the term ‘natural’ only applies to those products that contain no artificial or synthetic ingredients and consist entirely of ingredients that are only minimally processed,” and that Nature Valley’s labeling and advertising is therefore deceptive and in violation of California’s unfair competition and false advertising laws.

The suit asks the court to enjoin General Mills from marketing, within California, products containing the three ingredients at issue with claims of “100% natural,” “all natural” or “natural.” It also seeks unspecified damages or refunds to consumers.

The suit states that counsel for the plaintiffs sent General Mills a letter in July 2010 stating its objections to the use of “natural” on Nature Valley products with the three ingredients, and that the company replied with a letter in September 2010 stating that 26% of the products contained HFCS in 2010, and that none would contain HFCS as of 2011. The suit states that General Mills’ letter did not address the other two ingredients. CSPI’s press release on the filing of the suit states that “while few, if any, Nature Valley products still contain high-fructose corn syrup, many still do contain high-maltose corn syrup and maltodextrin.”

Late on Thursday, a General Mills spokesperson sent an email response to Marketing Daily’s request for comment on the suit. The response stated that while General Mills was aware of CSPI’s press release on the lawsuit filing, “we have not been served with a lawsuit.”

Asked if California has any formal or legal definition for the term “natural,” Stephen Gardner, director of litigation for CSPI, said that he is not currently aware of any such definition. However, he said, in deceptive consumer practices suits, “all that matters is whether consumers were deceived.” The suit maintains that there was deception based on consumer perceptions of “natural,” and no formal or scientific definition is required to make that case, he said.

On a federal level, debate about the Food and Drug Administration’s lack of a formal definition for “natural” has been ongoing.

The FDA’s Web site states: "From a food science perspective, it is difficult to define a food product that is 'natural' because the food has probably been processed and is no longer the product of the earth. That said, FDA has not developed a definition for use of the term natural or its derivatives. However, the agency has not objected to the use of the term if the food does not contain added color, artificial flavors, or synthetic substances."

The U.S. Department of Agriculture does have a definition for “natural” for the meat and poultry products that fall under its regulation. Per its site, it defines natural products as those “containing no artificial ingredient or added color” and “only minimally processed.” It states that minimal processing means that the product “was processed in a manner that does not fundamentally alter the product. The label must include a statement explaining the meaning of the term natural (such as ‘no artificial ingredients; minimally processed’)”.

In 2006, CSPI was among the parties that supported the Sugar Association’s petition requesting that the FDA undertake rulemaking to establish specific rules and regulations governing the definition of “natural” before a “natural” claim can be made on foods and beverages regulated by the FDA.

In its letter to the FDA at that time, CSPI wrote: “The USDA defines the word ‘natural’ in a manner that is consistent with consumer expectations and that has been accepted in the marketplace. This definition has not restricted creative and attractive labeling of foods subject to USDA authority. It has only prevented misbranding of foods that are not natural.”

The letter also stated: “Although no decisions have been made, CSPI is preparing a lawsuit to address the misuse of ‘natural’ [in foods/beverages falling under the FDA’s regulation]. It would be both more efficient and more broadly effective if, instead of forcing private litigants to sue one company at a time, FDA joined USDA in giving companies subject to its authority clear guidance on how to avoid misbranding. Therefore, CSPI joins the Sugar Association in urging the FDA to adopt a definition of ‘natural’ that is identical to that used by the USDA.”