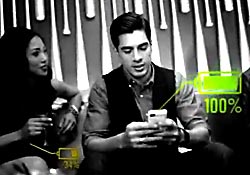 In the new mobile age, power is a hot commodity. In a new marketing campaign showcasing its “24-hour” battery solution, Duracell Powermat shows off how a man can keep his phone fully charged throughout the day (with a bit of celebrity mixed in).

“Smartphones, and the capabilities they have, have made us incredibly powerful. [They] have revolutionized how we live and put a lot of technology in the palm of our hands,” says Harry Woods, partner and creative director at Woods Witt Dealy & Sons, the agency behind the campaign. “But that’s sort of diametrically opposed to the powerlessness that comes when the battery dies three or four hours into the day.”

The new campaign uses the tagline “Never be powerless,” and features brand spokesman Jay-Z (an investor in the company, which is a joint-venture set up between Procter & Gamble and Powermat), as a representative of power, says Woods. “In every way possible, he’s one of the more powerful people we could think of, and decided he was a good icon to represent the brand,” Woods tells Marketing Daily. “He’s there to be an advocate to the idea that you don’t have to take powerless for an answer.”

An online video released this week begins following a young man from the beginning of his day, when he takes his smartphone and backup battery charger off a Duracell Powermat charging station. As the commercial takes him through his day, the young man is tracked with a green battery indicator, showing his power levels remaining in the upper 90%. (Other people he encounters are also represented by battery power levels, many of them red and in the lower percentages.)

The video shows the young man going to work, to a coffee house to meet with friends, to a sports bar, and finally to a nightclub with friends -– all with his battery mostly fully charged. After he places the phone on a charging pad in the club (next to another, identical phone), the phone begins to ring. He goes to answer it, noticing the caller is only identified as “B,” when a hand reaches out asking for the phone. That hand belongs to music mogul and rapper Jay-Z (one presumes the caller is his spouse, Beyonce). The young man, abashed, hands it over. “Never be powerless,” states Jay-Z at the end of the video.

The video is already available for viewing on YouTube and is being shared via social network media and public relations efforts, Woods says. Out-of-home executions featuring Jay-Z and the “Never be powerless” tag will be running in New York this summer. The campaign will likely expand to other national markets this fall, although Woods would not provide any other details.