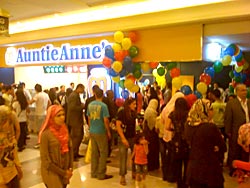 Auntie Anne's Pretzels is partnering with The Coca-Cola Company to pilot a mobile ad campaign in Atlanta.

The campaign, created by Millennial Media and Sparkfly Inc., will offer consumers a mobile deal that can be measured and tracked through the point of sale, down to specific consumer purchases at the item level.

The mobile ad campaign will be running during the back-to-school shopping season. Creative will test different combinations of Auntie Anne's and Coke items for purchase at 10 Atlanta-area Auntie Anne's locations, and each ad unit will contain a unique redemption code from Sparkfly that enables the item-level tracking of individual consumer sales and the revenue impact of the promotion.

One of the primary benefits of the partnership is to track an offer from the onset to point of purchase, said Heather Neary, Auntie Anne's chief marketing officer.

“Not only can we measure how effective individual offers are, but we can analyze the performance of individual display units,” Neary said in a release. “We have never been able to measure either of these before, and it's a solution that we can see taking us into the future.”

Point-of-sale redemption and data tracking are powered by Sparkfly's patented software platform and enabled through integration with major point-of-sale systems across retail locations. In combination with Millennial Media's advertising analytics, for the first time, Coca-Cola and Auntie Anne's will get a holistic view of their advertising campaign with data such as how often ads were viewed and redemption data down to item-level detail.

Consumers who receive the ads will be able to instantly redeem their coupon at checkout, and will also have the ability to save the deal for later. If a user chooses to save the deal, they will receive a SMS message with a link to the redemption code that can then be used at any time during the promotional period.

The campaign is running exclusively on the Millennial Media platform, providing Coke and Auntie Anne's with the ability to reach consumers on over 7,000 devices across more than 30,000 mobile apps.