Audi Plugs In Employees For A3 E-Tron 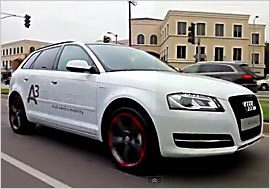 Audi has been teasing its forthcoming A3 e-tron plug-in gas/electric car with images in its brand campaign, and talking about it outright to technorati at thought-leadership conferences like the TED2012 where Audi had "Social Space" kiosks for attendees to explore Audi powertrain technology.

Now the automaker is launching a video documentary series, "Electric Life," focusing on a pure-electric variant of the A3 e-tron as well as the "e-Pilots" who are testing the vehicles in real-world situations. The e-Pilots are a cadre of Audi employees who get to use the vehicle in their day-to-day lives. The company has dispensed 17 of the prototype vehicles to Audi folks across the country as part of the program. The first in the video series shows one of the subjects having a charging station installed in her home.

By testing the car in different markets, Audi hopes to attain a profile of the effect of climate conditions, driving patterns and energy performance and use insight gained in the final development of future EV technology applications.

Although it is starting with plug-in hybrid under the hood, Audi is mulling full battery-electric (BEV), and extended-range electric (EREV) versions. The  Audi A3 e-tron in the pilot program has a fully electric powertrain with a 26kw lithium-ion battery.

Jeff Curry, director of e-mobility and sustainability strategy at Audi -- who spoke to Marketing Daily from the Plug-In Conference and Expo in San Antonio, Texas -- says the electric car has piqued the interested of Audi owners, and that the videos "Are meant for a broad audience. We are at an early stage of e-tron brand establishment in the U.S. so it's really an early look at how we are putting these on American roads."

He says the goal of the video series is also to generate conversation. "We are very strong in both traditional and social media, and we have a huge social fan base. We give Audi fans interesting stories, content and insights about what we are bringing and we are looking for feedback on products like e-tron, so social media becomes a powerful medium for us."

The company will sell a plug-in hybrid version first, per Curry. He says the car will be in U.S. showrooms in 2014, so right now Audi is in fine-tuning mode. Curry says the pilot program is thus a bi-modal program: first to test and second to tout.

The ideal markets for the A3 e-tron are also strong Audi markets, Curry says, adding that progressive, urban markets are where Audi sells a majority of vehicles and also where there is the strongest infrastructure for charging and consumer predilection for electric cars. "We are now seeing broad interest in major metro areas across the country -- and that suits us perfectly because of where our customers are distributed, because of their aggressive attitude and mindset. Also, at the time we are launching there is a growing interest, generally, in premium electric vehicles."