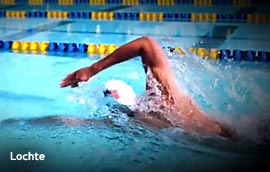 Anyone who’s ever watched an Olympics broadcast knows sports are only a part of the allure. There’s also the athletes’ stories, many of which involve overcoming obstacles or hours of solo training just to earn a trial.

As part of its sponsorship of Team USA for the Olympic Games, AT&T is launching a campaign to bring several of these stories to life via short films and its social networking channels. The effort, called “My Journey,” will feature 30-second teasers during the primetime broadcasts of the London Olympic Games, but the extended stories will live online.

“The Olympics and Team USA is all about the athletes, and they are the stories,” Bill Moseley, director of corporate sponsorships at AT&T, tells Marketing Daily. “Taking a cue from our broadcast partners at NBC, we wanted to do the same, but we wanted to tell them from the athletes’ perspective.”

Some of the films tell stories of athletes who competed in Beijing and are returning to London. In one, swimmer Ryan Lochte says, “I’ve been focused on London since I got out of the pool in Beijing.” The film then goes on to show how he trained over the past four years, and how technology played a role in his life during that time. When he talks about changing his diet, an app for 24-Hour Fitness comes up showing a calorie tracker. When he speaks of traveling the world to compete, he talks about playing “a lot of [mobile game] SuperMonkey Ball 2.” He talks of the music he listens to, tweets from fans, and texts from his family. “Now it’s 2012 and everything is coming together,” he says at the end. “Four years, gone in a flash. And here I am. Again.”

The digital aspect of the athletes’ stories was an important part of the entire “My Journey” package, Moseley says. It allows the company to follow through on its brand promise of being an enabler for people to use technology to fit into their lives. “The great part about it is, it wasn’t so much that we highlighted it, it’s that we let the athlete tell the story,” Moseley says. “At the end of the day, them telling the story is extremely digital.”

To further deepen the connection among the athletes and their fans, AT&T is allowing certain perks for fans through the company’s Facebook page, YouTube channel and corporate web site. For instance, fans can download a song featured in Lochte’s video (that he says is his favorite) or register for a sweepstakes to win his skateboard (also featured prominently in the video). “That enables us to go beyond advertising and [move into] truly engaging our consumers,” Moseley says.

Currently in its 28th year of supporting Team USA, AT&T is also running traditional television commercials throughout the games. One depicts marathoner Ryan Hall running across different terrains and different towns while streaming an epic audiobook, Homer’s The Odyssey. The book runs out before his run, but Hall is able to download another via AT&T’s 4G network. Throughout the two-week games, AT&T will run other spots for which Moseley declined to offer the details.

“You will see some exciting pieces that are integrated with NBC,” he says. “We really took a concerted effort to be athlete-centric. What you’ll see from all of our pieces is that they’re wrapped around athletes.”