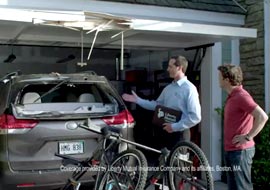 Liberty Mutual is launching a new campaign during the Olympics Summer Games.

The creative has a new theme, “Humans,” and kicks off July 28 with two executions, a 30-second and 60-second version.

The spots feature vignettes that illustrate everyday moments when people show their imperfections, and when there is a need for responsibility and insurance.

Liberty Mutual Insurance secured time on its flagship TV and digital properties, including NBC, Bravo, CNBC, and NBC Sports Network, with a high percentage of placements during prime-time broadcasts and a consistent presence throughout each day of the games.

The campaign is fully integrated, including digital and social extensions. The digital presence spans across high-reaching premium publishers such as The New York Times, Reuters and Huffington Post. Digital extensions include a Facebook app that allows users to tag each other into "Human" experiences as seen in the television spot, and share them with friends.

Creative, which was developed by Hill Holliday, strives to communicate the company's “Responsibility” brand character in a way that is relevant to consumers and the role of insurance in their lives, said Jim MacPhee, senior vice president and chief marketing officer, Liberty Mutual Personal Insurance.

"In a highly competitive personal insurance marketplace it is important to promote our differentiating attributes, characterized by our empathy towards policyholders in times when they need us," MacPhee said in a release.

The 60-second spot opens with the voiceover by actor Paul Giamatti: "Humans. We mean well but we are imperfect creatures living in an imperfect world." The vignettes span a wide range of mishaps that damage property, cars or homes, and sometimes all three at the same time. The musical score is provided by The Human League and its hit 1980s song, "Human." The spot closes with the voiceover: "That's the funny thing about humans. When things are at their worst, we are at our best."

The 30-second spot focuses on auto policies and Liberty Mutual products, like its exclusive better car replacement and accident forgiveness. The narration opens: "Humans. Even when we cross our Ts and dot our Is, we still run into problems. Namely, other humans." Vehicles are damaged in many ways set against the musical backdrop of the theme song from "The Odd Couple."

Each spot includes Liberty Mutual Insurance agents on the scene to help policyholders in their moment of greatest need, regardless of whether the damage was self-inflicted or avoidable. The tagline continues to be: "Responsibility. What's your policy?"