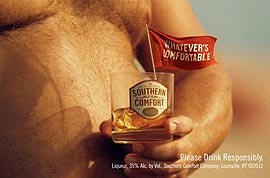 The campaign, “Whatever’s Comfortable,” features several firsts for the brand, including representing Southern Comfort’s largest-ever media buy in a single fiscal year -- more than double last year’s spend and equal to the last three fiscal years’ spend, according to a brand spokesperson.

On Aug. 5, a 60-second version will begin airing on television. While Southern Comfort has been running TV ads for at least a decade, this is its first 60-second spot. Further, the campaign marks the brand’s first venture into broadcast TV.

The 60-second spot will air for two weeks. A partial list of the schedule includes  NBC’s “Late Night With Jimmy Fallon” and “Saturday Night Live,” ABC’s “Jimmy Kimmel Live” and CBS’s “Late Show With David Letterman,” as well as cable outlets including ESPN and ESPN 2, Comedy Central and AMC. (The spot’s first airing will be on AMC’s “Breaking Bad.”)

The “Beach” creative features a well-tanned, average-looking guy (with a paunch) strolling down a beach, clearly relaxed and personifying the campaign’s mission of “celebrating and inspiring” people who are “completely comfortable with themselves.”

The product doesn’t make an appearance until the spot’s end, via a glass of Southern Comfort picked up along the way. The stroll’s accompanying music is “Hit or Miss” by the folk singer Odetta; the lyrics frequently repeat the phrase “I gotta be me.” There’s no voiceover or copy (other than the “Whatever’s Comfortable” message on a flag in the glass of SoCo).

Southern Comfort, which had been with Arnold Worldwide since 2001 (Arnold continues as the AOR for Brown-Forman’s Jack Daniels), began its agency review in the spring (its new fiscal began in May), with the intention of rolling out its new agency’s first creative in August, according to the brand spokesperson.

“Wieden+Kennedy’s global perspective, passion and insight will enable us to build equity with our core consumer and ensure Southern Comfort meets its ambitious growth objectives,” said Mark Bacon, SVP, managing director for the brand, in a statement. Arnold Worldwide continues to be the AOR for Brown-Forman’s Jack Daniels.