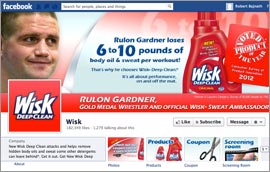 When it comes to touting a detergent that specializes in removing body oils and sweat stains, it helps to have someone with experience in perspiration. That’s why Sun Brands’ Wisk Deep Clean has partnered with former Olympic gold and bronze medal winning Greco-Roman wrestler Rulon Gardner and his mother, Virginia, as the company’s first “Sweat Ambassadors.”

According to the company, Gardner, who weighs 300 pounds, loses 6 to 10 pounds of sweat during each workout -- and, his mother can attest, has created countless loads of tough-to-clean laundry. In addition to Rulon, Virginia raised eight other children and has been a Wisk user for years, according to the company.

“[Gardner] knows the value of hard work and sweat,” Lora Van Velsor, director of marketing for Wisk, tells Marketing Daily. “In fact, he is probably the torture test for sweaty laundry.”

In his roles as a Sweat Ambassador, Gardner will be making media appearances on behalf of the brand (such as an appearance on Fox & Friends on Wednesday), as well as featured heavily on the brand’s Facebook page and in other social media outlets.

Van Velsor wouldn’t comment as to whether more Sweat Ambassadors (whom she described as “someone who knows all about determination and hard work, and like Rulon, does a lot of sweating”) were in the pipeline,. She said the brand will be exploring the potential for others in the future.